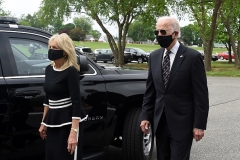 (CNSNews.com) - Former Vice President Joe Biden, in a rare, in-person interview, suggested on Tuesday that at least 35,000 to 50,000 coronavirus deaths in the U.S. were avoidable "but for lack of attention and ego" on President Trump's part.

Biden, sitting 12 feet away from CNN's Dana Bash, also stated that wearing a mask "projects leadership." But neither Biden nor Bash was wearing a mask for this backyard interview:

"And I watched the president yesterday wearing no mask, you know, and something -- making fun of the fact I wore a mask," Biden said.

"The truth of the matter is, that I think you're supposed to lead by example. And one of the things our governor said, he wanted to keep social distancing, stay at home has been the order until June 1 of this year. And so I think it's important that, look --100,000 deaths, 100,000 deaths, and at least 35,000 to 50,000 were avoidable but for lack of attention and ego, I think."

Dana Bash noted that President Trump on Tuesday retweeted a photo of Biden wearing a mask (shown below). Bash told Biden that Trump was trying to "belittle" him, by making the mask look like "a sign of weakness."

President Trump retweeted this photo of a masked Joe Biden on Tuesday, May 26.

“I mean, every leading doc in the world is saying you should wear a mask when you're in a crowd, and especially when you know you're going to be in a position where you're going to inadvertently get closer than 12 feet to somebody. I know we're 12 feet apart, I get that.

"But it's just absolutely -- this macho stuff, for a guy -- I shouldn't get going. But it just, it's cost people lives. It's costing people's lives. And like I said, we're almost 100,000 dead today. 100,000 people -- Columbia study showing that we could have -- if you just started a week earlier, we would have saved thousands of lives. I mean, this is a tragedy."

"Sure he is," Biden agreed. “And it's stoking deaths. That's not going to increase the likelihood that people are going to be better off," Biden responded.

Bash asked Biden, "Do you think wearing a mask projects strength or weakness?"

"Leadership," Biden said. "What it projects is leadership. Presidents are supposed to lead, not engage in folly and be falsely masculine. It reminds me of the guys that I grew up with playing ball. They’d walk around with a ball in their hand but they didn't like to hit very much."