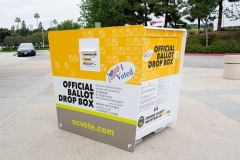 A ballot drop box for the 2020 General Election in California at the Irvine train station as seen on October 23, 2020 in Irvine, California. (Photo by AaronP/Bauer-Griffin/GC Images)

(CNSNews.com) - On a trip to Tulsa where he focused on racial hatred and division, President Joe Biden brought up voting rights and the Democrats' push to pass H.R. 1, a bill that would relax voting rules and give the federal government more control over how states and localities run their elections.

Democrats continue to make the case that Republican state legislatures are specifically trying to suppress the black vote by requiring voter identification, for example, or by eliminating the unsolicited mailing of ballots to everyone on the voter registration rolls, which often are outdated.

"We must find the courage to change the things we know we can change," Biden said, as he discussed his administration's expanded effort to boost "black wealth creation" through housing and jobs programs.

"But just as fundamental as any of these investments I've discussed is maybe the most fundamental -- the right to vote," Biden said, as he invoked the late Rep. John Lewis (D-Ga.), for whom the Democrats' "voting rights" bill is named.

"But you know what John said?" Biden asked. "He called the right to vote precious, almost sacred. He said (it is) the most powerful non-violent tool we have in a democratic society.

"This sacred right is under assault with incredible intensity like I've never seen, even though I got started as a public defender and a civil rights lawyer. With an intensity and aggressiveness that we've not seen in a long, long time. It's simply un-American," Biden said.

Texas is among the Republican-led states that has come under leftists' fire for election reforms it has so far been unable to pass.

As Gov. Greg Abbott described it, the bill, which he declared to be an emergency measure, would "prevent election officials from jeopardizing the election process and encouraging voter fraud through the abuse of mail ballots and drive-thru voting.” The bill also would promote transparency at the polls by ensuring that poll watchers in Texas are not obstructed from observing the counting of ballots.

"Our objective in Texas is to ensure that every eligible voter gets to vote and that only eligible ballots are counted," said Governor Abbott in a March news release. "In the 2020 election, we witnessed actions throughout our state that could risk the integrity of our elections and enable voter fraud, which is why I made election integrity an emergency item this session."

(Biden in a news release called the Texas bill an attack on "the sacred right to vote" and an "assault on democracy.")

But to Biden and his fellow Democrats, rules like the ones mentioned above will suppress the vote, even though American voters have never had so many options for early voting, absentee voting, and in-person voting.

'Assault on the right to vote'

"In 2020 we faced a tireless assault on the right to vote," Biden claimed in Tulsa on Tuesday:

Restrictive laws, lawsuits, threats to--of intimidation, voter purges, and more. We resolved to overcome it all, and we did. More Americans voted in the last election than any--in the midst of a pandemic, than any election in American history.

You got voters registered. You got voters to the polls. The rule of law held. Democracy prevailed. We overcame. But today, let me be unequivocal. I've been engaged in this work my whole career, and we're going to be ramping up our efforts to overcome again.

I will have more to say about this at a later date, the truly unprecedented assault on our democracy, an effort to replace nonpartisan election administrators and to intimidate those charged with tallying and reporting the election results. But today, as for the act of voting itself, I urge voting rights groups in this country to begin to redouble their efforts now to register and educate voters.

And in June--And June should be a month of action on Capitol Hill. I hear all the folks on TV saying, "Why doesn't Biden get this done?" Well, because Biden only has a majority of effectively four votes in the House and a tie in the Senate, with two members of the Senate who vote more with my Republican friends. But we're not giving up.

Earlier this year, the House of Representatives passed the For the People Act to protect our democracy. The Senate will take it up later this month. And I'm going to fight like heck with every tool at my disposal for its passage. The House is also working on the John Lewis Voting Rights Act, which is--which is critical to providing new legal tools--to combat the new assault on the right to vote.

To signify the importance of our efforts, today I'm asking Vice President Harris to help these efforts and lead them, among her many other responsibilities. With her leadership and your support, we're going to overcome again, I promise you. But is going to take a hell of a lot of work...

According to a summary provided by the Congressional Research Service, H.R. 1 would expand voter registration (e.g., automatic and same-day registration) and voting access (e.g., vote-by-mail and early voting). It also limits the removal of voters from voter rolls.

The bill addresses ethics in all three branches of government, including by requiring a code of conduct for Supreme Court Justices, prohibiting Members of the House from serving on the board of a for-profit entity, and establishing additional conflict-of-interest and ethics provisions for federal employees and the White House.

The bill requires the President, the Vice President, and certain candidates for those offices to disclose 10 years of tax returns.