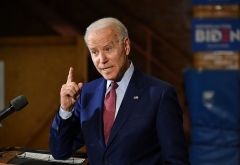 Democrat presidential candidate Joe Biden on the campaign trail in Flint, Michigan on March 9, 2020, just before he went into seclusion in Delaware. (Photo by MANDEL NGAN/AFP via Getty Images)

(CNSNews.com) - "What did you know about those moves to investigate Michael Flynn, and was there anything improper done?" ABC's George Stephanopoulos asked former Vice President Biden on Tuesday's "Good Morning America."

"I know nothing about those moves to investigate Michael Flynn, number one," former Vice President Joe Biden responded:

Number two, this is all about diversion. This is a game this guy (President Trump) plays all the time.

The country is in crisis. We're in an economic crisis, a health crisis, we're in real trouble. He should stop trying to always divert attention from the real concerns of the American people. The American people are worried, with good reason. He has acted irresponsibly from the very beginning. He continues to act irresponsibly. He hasn't done his job.

So said Biden, as he tried to divert attention away from the apparent failures of the U.S. justice system in Gen. Michael Flynn's case. The Trump Justice Department, believing the FBI was out to get Flynn, has now filed a motion to dismiss the charges against him.

Stephanopoulos followed up, asking Biden about the Jan. 5, 2017 meeting at the White House, where Biden and President Obama "were briefed on the FBI's plan to question Michael Flynn over those conversations he had with the Russian Ambassador Kislyak."

Biden, inexplicably, told Stephanopoulos, "I thought you asked me whether or not I had anything to do with him being prosecuted. I'm sorry. I was aware that there was -- that they had asked for an investigation, but that's all I know about it, and I don't think anything else.”

Biden diverted again: "Look, think about this. Can you imagine any other president of the United States focusing on this at the moment when the country is just absolutely concerned about their health, the health of their children, the health of their families, the health of their -- I mean this is -- we have an economic crisis. We have a health crisis. This is all about diverting attention. Focus on what's in front of us. Get us out of this, Mr. President."

Stephanopoulos tried again: "Was the Justice Department right in dropping those charges against Michael Flynn?" he asked Biden.

"Well, based on a couple thousand I guess I saw a headline, yesterday, I guess -- a couple thousand former -- or was it a couple hundred,  I'm not sure --  a whole lot of former Justice Department people said the attorney general should step down. I have been absolutely stunned by the way in which he has not conducted the office properly.

“But, look, I don't know the detail of where we are right now. My point is a simple one. Focus on what's in front of us. You have plenty of time to investigate this issue.

"I think there's nothing there, there -- but you know it's not a surprise that, in fact, the justice department decided anybody who was an ally of the president didn't do anything wrong ever anyway.”