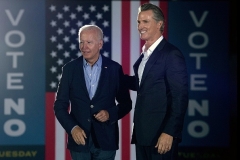 (CNSNews.com) - Coughing repeatedly at the microphone, President Joe Biden told Californians that Donald Trump is on their state's gubernatorial ticket.

"The eyes of the nation are on California," Biden told a crowd that included Trump supporters:

Because the decision you're about to make isn't just going to have a huge impact on California. It's going to reverberate around the nation, and quite frankly, not a joke, around the world. And here's why:

All of you know last year I got to run against the real Donald Trump. Well, this year -- this year the leading Republican running for governor is a -- closest thing to a Trump clone that I've ever seen in your state. No, I really mean it. And he's leading the other team. He's a clone of Donald Trump.

Can you imagine him being governor of this state? You- can't- let- that- happen.

Biden said the most important reason to vote "no" on the recall is the pandemic:

"Voting no will be protecting California from Trump Republicans trying to block us from beating this pandemic. COVID 19 -- Gavin Newsom has had the courage to lead..."

Biden called out the Republican governor of Mississippi for criticizing Biden's new vaccine and testing mandates: "People are doing everything they can to block or undermine the life-saving mandates we proposed."

Biden said it's about politics, not public health.

At the end of his speech, Biden again invoked Trump:

Folks, I could go on, but here's the deal. I'm going to make this as simple as I can.

You either keep Gavin Newsom as your governor (cough) or you'll get Donald Trump. It's not a joke. Republican governor, blocking progress on COVID-19, who is also anti-woman, anti-worker, a climate denier who doesn't believe in choice. [Biden appeared to call Elder the “Republican governor.”]

The choice should be absolutely clear. Gavin Newsom. You have a governor who has the courage to lead.

So please, not a joke, on behalf of the people of Delaware and Pennsylvania and Minnesota and all across America, don't take anything for granted...

Biden urged Californians to vote no on the recall.

The recall election ends tonight, and polls indicate Newsom's job is safe in the deep blue state he leads.