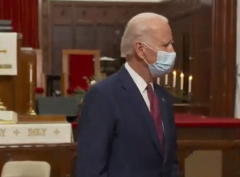 (CNSNews.com) - Former Vice President Joe Biden, now running for president, told a gathering of ministers and community activists on Monday that the American public is ready for institutional change, and he indicated that he'll raise taxes to accomplish that, if elected:

Biden said it's "pure selfishness" to object to higher taxes that would help pay for programs benefiting the black community.

"What we have to do is put people in a position they can compete economically," Biden told the Interdenominational Ministers Action Council at Bethel AME Church in Wilmington, Delaware:

There's a lot of things I'm confident the public is ready to do. And guess what? Those of you that know me, you know me well. When I was pushing a lot of these issues before, I didn't just go to black community and talk to them. I went to green room and I--and talked to the business--no, I'm serious. Because here's the deal, we don't spend enough time doing this, guys like me.

And I always ask these guys -- 'you're raising my taxes.' Let me tell you. Are you better off as a wealthy white guy living in suburbia when the black community is doing well or when it's doing bad? Never thought of it that way. It's pure selfishness.

This is everyone's interest, these things we're proposing. And I think the public is getting to a place they've never been before in understanding a lot of that. But, it's going to take a whole hell of a lot of hard work. A lot of hard work. But, I'm confident it can be done.

"We want to fundamentally make this change different than the one before. ...The change that I think has to place now is reestablishing and maintaining, but significantly increase--severely increase economic opportunity that's across the board in a way that hadn't existed.

"We hadn't--that hadn't been the focus in the past. And so, I think that's going to be your--really very, very important part of whether or not we're going to end up making a difference."