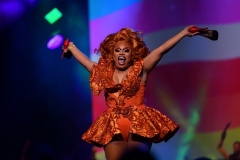 Bob the Drag Queen performs onstage during the opening ceremony of WorldPride 2019 in Brooklyn, New York, on June 26, 2019. (Photo by ANGELA WEISS/AFP via Getty Images)

(CNSNews.com) - The "proud mom of two girls," ages 8 and 10, asked Democrat presidential nominee Joe Biden Thursday night how he would reverse President Trump's  "dangerous and discriminatory" actions regarding transgenders to ensure that their rights are protected under U.S. law.

"The idea that an 8-year-old or a 10-year-old, decides, you know, I want to be transgender -- that's what I think I'd like to be, make my life a lot easier -- there should be zero discrimination. And what's happening, too many transgender women of color are being murdered. They're being murdered."

LGBTQ activists are pressing for passage of the Equality Act, which would amend the Civil Rights Act of 1964 to prohibit discrimination based on sex, sexual orientation, and gender identity in public accommodations and facilities, education, federal funding, employment, housing, credit, and the jury system.

The bill specifically prohibits an individual from being denied access to a shared facility, including a restroom, a locker room, and a dressing room, that corresponds with the individual's gender identity.

The House of Representatives passed the Equality Act in 2019, but the Senate did not take up the bill.

Critics, including the Heritage Foundation, warn the Equality Act would punish citizens for their views on biological sex by forcing employers and workers (including bakery owners) to conform to new sexual norms or else lose their businesses and jobs.

Heritage lists other objections as well:

-- The Equality Act would force hospitals and insurers to provide and pay for sex-change procedures against any moral or medical objections.

-- It would normalize the social transition of gender dysphoric children and create an expectation that parents comply.

-- It would ultimately lead to "the erasure of women" by dismantling sex-specific facilities, sports, and other female-only spaces.

-- It would adversely impact faith-based charities, volunteers, and the populations they serve.

Biden on Thursday, in response to the "proud mom," repeated an anecdote about his father being a champion for homosexuals way back in the days when the 77-year-old  "Joey" was a teenager.

You may recall, I'm the guy who said -- I was raised by a man who, I remember, I was being dropped off -- my dad was a high-school-educated, well-read man who was a really decent guy, and I was being dropped off to get an application in the center of our city, Wilmington, Delaware, the corporate capital of the world at the time, and these two men -- I'm getting out to get an application to be a lifeguard in the African-American community, because there was a big swimming pool complex.

And these two men, well-dressed, leaned up and hugged one another and kissed one another. I'm getting out of the car at the light, and I turned to my dad, my dad looked at me, he said, ‘Joey, it's simple. They love each other.’

The idea that an 8-year-old child or a 10-year-old child, decides, you know, I want to be transgender --that's what I think I'd like to be -- make my life a lot easier -- there should be zero discrimination.

"And so, I promise you, there is no reason to suggest that there should be any right denied your daughter or daughters, whichever, one or two -- your daughter, that your other daughter has a right to be and do. None. Zero.