Biden: Police Need 'A Psychologist or Psychiatrist to Keep Them From Having to Use Force' 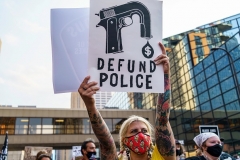 A protester holds a sign reading "Defund the Police" on August 24, 2020 in Minneapolis, Minnesota. (Photo by KEREM YUCEL/AFP via Getty Images)

(CNSNews.com) - Democrat presidential candidate Joe Biden said at Tuesday's debate he's "totally opposed to defunding police officers," but he does like the idea of pairing psychologists or psychologists with officers "to keep them from having to use force."

Biden was responding to a question from debate moderator Chris Wallace, who asked him about a recommendation from the Biden-Bernie Sanders task force to "re-imagine policing."

"First of all, what does re-imagining policing mean...and do you support the Black Lives Matter call for community control of policing?" Wallace asked Biden:

Look, what I support are the police having the opportunity to deal with the problems they face, and I'm totally opposed to defunding the police offices. As a matter of fact, police, local police, the only one defunding -- in his budget calls for a $400-million cut in local law enforcement assistance.

They need more assistance. They need when they show up for a 9-11 call to have someone with them as a psychologist or psychiatrist to keep them from having to use force and be able to talk people down. We have to have community policing like we had before where the officers get to know the people in the communities. That's when crime went down, it didn't go up. It went down. And so we have to be--

Trump interrupted, insisting that Biden is "talking about defunding the police."

The two began arguing about who has the support of law enforcement.

Earlier, Biden promised to bring more "transparency" to policing, and to convene a White House summit "to work this out."

There's systemic injustice in this country, in education and work and in law enforcement and the way in which it's enforced," Biden said: