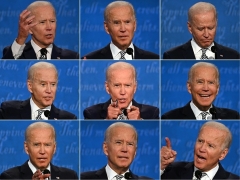 The fact is that there is racial insensitivity. People have to be made aware of what other people feel like, what insults them, what is demeaning to them. It’s important people know.

Many people don’t want to hurt other people’s feelings, but it makes a big difference. It makes a gigantic difference in the way a child is able to grow up and have a sense of self-esteem.

In fact, we’re all Americans. The only way we’re going to bring this country together is bring everybody together. There’s nothing we cannot do, if we do it together. We can take this on and we can defeat racism in America.

Biden made the comment after Trump was asked to explain why he directed federal agencies to end racial sensitivity training "that addresses white privilege or critical race theory," as moderator Chris Wallace put it:

"We were paying people hundreds of thousands of dollars to teach very bad ideas and frankly, very sick ideas," Trump said. "And really, they were teaching people to hate our country. And I’m not going to do that. I’m not going to allow that to happen.

Trump noted that during the Obama-Biden administration, "there was tremendous division. There was hatred." He mentioned Ferguson, Oakland, and Baltimore.

"Law and order with justice, where people get treated fairly," Biden said.