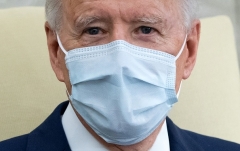 (CNSNews.com) - "What are your immediate and tangible plans to address how deeply divided we are as a nation?" a woman asked President Joe Biden at his CNN-hosted town hall in Wisconsin Tuesday night.

"I take issue with what everybody says about the division," Biden responded.

As an example of unity, Biden said that 69 percent of the American people support his "plan on COVID."

"The nation is not divided," he insisted:

You go out there and take a look and talk to people, you have fringes on both ends, but it's not nearly as divided as we make it out to be. And we have to bring it together.

You may remember how -- the trouble I got in. I said there were three reasons I was running -- one, to restore the soul of the country, decency, honor, integrity -- talk about the things that mattered to people, treat people with dignity.

Secondly, I said to rebuild the backbone of the country, the middle class, and this time bring everybody along and have a chance. And the third reason is unite the country.

Well, in my own primary, I got laughed -- unite the country? What are you talking about?

You cannot function in our system without consensus, other than abusing power at the executive level [said the president who already has signed more than 50 executive orders and actions].

"As my mother would say, if half the things that occurred in the last campaign came out of my mouth, when she would say, as a kid, you would wash my mouth out with soap. I mean, we have to be more decent and treat people with respect and just -- just decency."

So Biden seemed to equate "respect" and "decency" with "unity."