Biden: 'I'm Going to Work Like the Devil to Bring Gas Prices Down' 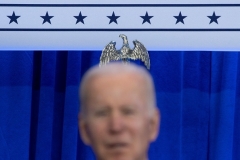 (CNSNews.com) - "Inflation is up. It's up," President Biden told a gathering in Culpeper, Virginia on Thursday, the same day the Bureau of Labor Statistics announced that inflation is running at a 40-year high, led by increases in food, electricity, and shelter.

Biden was in Culpeper to discuss his plan to lower prescription drug prices. But in what he called a "slight digression," he discussed the rising cost of daily living, including gasoline prices.

"And look, the fact is that we're in a situation now where, you know, you should have peace of mind," Biden said.

"I know food prices are up, and we're working to bring them down. As I said, I grew up in a family where a price at the pump went up, you felt it. And I understand."

Then the man who canceled the Keystone XL pipeline and campaigned on a promise to "transition away from the oil industry" said this:

You want to lower the cost of living for people, help them in those areas. So, there's more than one way for a family when it comes to raising their standard of living. I'm going to work like the devil to bring gas prices down, which I'm going to -- working to make sure that we keep strengthening the supply chains to bring the cost of energy and everything else, and the goods that come to America, down by helping the poorest 24-7, by changing a whole range of things.

You know what's happened with COVID? COVID has caused a significant increase in prices in the supply chain, because when a factory shuts down in another part of the world and you need that particular product in order to finish the -- and build whatever you are working on, the price goes up exponentially, like for cars.

But in the meantime, there's a lot we can do to give families extra breathing room.

Here Biden plugged his stalled "Build Back Better" plan, which is going nowhere in the Senate. Yet Biden called it a "law."

Earlier in his speech, Biden said something similar:

In my Build Back Better legislation, that with [Rep. Abigail Spanberger's] leadership, passed the House of Representatives, we can do that. Now we just have to get it through the United States Senate, and we're close.

We're saying to drug companies, you are finally going to become accountable when you raise prices on the American people, accountability.