Biden: 'If You're Going Out and Buying a Yacht, It Doesn't Help the Economy a Whole Lot' 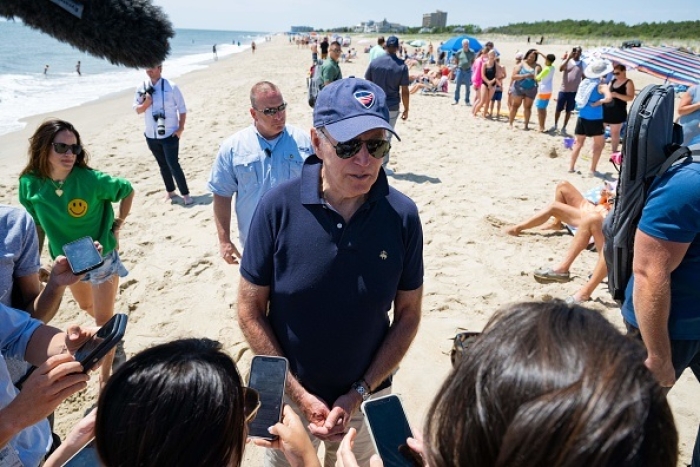 (CNSNews.com) - President Joe Biden made another pitch to raise taxes on corporations and wealthy Americans on Monday, telling reporters gathered on a Delaware beach: "If you're going out and buying a yacht, it doesn't help the economy a whole lot."

People who buy yachts, of course, keep yacht-sellers and yacht builders in business. And the yacht owners need to hire crews to run their ships, so job-creation is also part of the yacht-buying experience.

But, if yacht-buying doesn't help the economy, Biden does believe that lowering the price of insulin -- and buying expensive electric cars -- will help.

In the following exchange with reporters, Biden was arguing that "there’s nothing inevitable about a recession." He also suggested there's a "good" side to higher gasoline prices:

"I was talking to (economist) Larry Summers this morning. And there’s nothing inevitable about a recession," Biden said:

"Insulin — if you know anybody who has Type 2 diabetes or has a child who has it, they need the shots during the week. It could cost them up to 1,000 bucks a week. And it may not cost more than $35. And they’re still going to make three-and-a-half times what they invested in in the insulin.

"We also can move in a direction that we can provide for the tax — increasing the tax — taxes on those in the — in the corporate area, as well as the individuals as it relates to Trump’s tax cut, which is inflation. You know, if you’re going out and buying a yacht, it doesn’t help the economy a whole lot.

"And we also — I’m working with our team is — to put together, at the same time — my dear mother used to have an expression: 'Out of everything lousy, something good will happen if you look hard enough for it.'

"We have a chance here to make a fundamental turn toward renewable energy, electric vehicles — and not just electric vehicles, but across the board. And that’s something we should be — my team is going to be sitting down with the CEOs of the major oil companies this week and try to get an explanation of how they justify making $35 billion on the first quarter."

Biden said "his team," not him personally, will meet with the oil and gas CEOs.

A reporter asked Biden, "How can they pump more if they’re already at capacity?"

"Well — well, they can, because what they’re doing — first of all, what they’ve done is they’ve cut back in the refining capacity. All this stuff you hear about and you guys have to report — that 'Biden limited the amount of oil and….'

"They have 9,000 leases — 9,000 leases on public land [he whispered to a female reporter], and they should either use it or lose it. And that’s number one.

The American Petroleum Institute, in a recent letter to President Biden, explained "what is happening in global energy markets and (provided) concrete and practicable solutions for addressing today’s high-price environment."

-- "Refined product prices are determined on the global markets. Crude oil is always the top contributor to the prices U.S. drivers see at the pump."

-- "U.S. refineries are operating at or near maximum utilization. According to the EIA, U.S. refineries are running at 94 percent of capacity — among the highest in the world — and are producing more gasoline and diesel than current U.S. demand."

-- "About half of U.S. refinery shutdowns are conversions to renewable fuel production."

-- U.S. refining is a long-cycle business. Refiners do not make multi-billion-dollar investments based on short-term returns. They look at long-term supply and demand fundamentals and make investments as appropriate. To that end, following on your campaign promise to 'end fossil fuel,' consider just some of the policy and investment signals being sent by various federal agencies and allied state governments to the market about our refining industry..."

-- "Current market conditions are complex and require a closer look. The timing and reasons for shutdowns of several refineries...were primarily due to lack of buyers willing to continue operating the facilities as petroleum refineries given growing rhetoric about the long-term viability of the industry."

-- "U.S. refiners are, in fact, adding new U.S. refining capacity where it makes business sense. For example, ExxonMobil is expanding the capacity at its Beaumont, TX refinery and Valero at its Port Arthur, TX refinery for a combined total of 300,000 barrels per day."

"Although the Russian invasion is undoubtedly exacerbating the situation, today’s challenges are largely the result of high crude prices due to 1) a supply/demand imbalance, 2) logistics reshuffling as the world emerges from the pandemic, strong consumer demand, the ban on Russian products, and 3) policy decisions made at the federal and state levels over many years and by successive administrations.

"To protect and foster U.S. energy security and refining capacity, we urge to you to take steps to encourage more domestic energy production, including promoting infrastructure development, addressing escalating regulatory compliance costs, allowing all technologies to compete to reduce emissions, modernizing fuels policies, and ensuring capital markets are functioning for all participants."