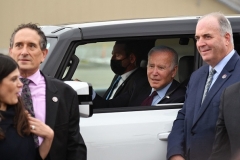 (CNSNews.com) - "God, it's good to be back in Detroit," President Joe Biden told a gathering at a General Motors electric vehicle factory, where he touted the recently passed Infrastructure and Jobs Act, and plugged part two of his plan -- the Democrats' social spending agenda, not yet passed.

Typical of Biden, he retreated into the way-back-machine in an attempt to connect with his audience. On Wednesday, he talked about cars, including the electric Hummer he'd taken for a spin shortly before he started speaking:

And that Hummer is one hell of a vehicle, man. Yo. As I used to say in the Senate, as some of my senators, colleagues will know, like (Rep.) Debbie (Dingell), 'Excuse the point of personal privilege.' I came up in an automobile family. My dad ran the largest automobile dealership.

He didn't own it. He just ran it for 30 years in Delaware. And so, I was raised on cars. And I have a 1967 Corvette that I got as a wedding gift. When my deceased wife and I got married, my dad could afford the payments. He couldn't afford to buy it. But the point was, I thought that was hells bells, man.

Three-twenty-seven, 350, zero to 60 in 5.3 seconds. This truck, three times heavier. Zero to 60 in three seconds! Whoa! And besides, there's a beautiful red Corvette, maroon Corvette, I'm driving home over here.

Mary, you are an incredible leader, you really are. Thank you for hosting us at the very same facility where you once served as a plant manager. I believe Mary got a promotion or two since then.

I know a lot about that as a son of a car guy. Thirty years ago, 40 years ago, my dad managed those dealerships back home. I used to work on my dad's operation, drive up to Manheim Automobile Auction and bring back automobiles. And I guess I got a promotion, too.

Look, I got a chance to drive a pretty incredible machine back then, I thought, but I never could have imagined vehicles like the ones that I just took for a spin. The first ever all electric Hummer, which I first got to check out back in August, when GM brought one of the White House, one to the White House lawn, in the South Lawn, along with the electric Ford F-150 and the electric Jeep Wagoneer.

Masterpieces of modern manufacturing built by union workers, and proof -- and proof that America has what it takes to win the competition in the 21st century.

Sticking to his familiar speech blueprint -- only the names and places change, the wording remains much the same -- Biden spoke again about "the kind of conversations that take place around your kitchen table."

He said the conversations that he imagines are "as profound as they are ordinary. How am I going to get to work on time if I-75 is flooded again?

"How can I be sure my job at the auto plant is still going to be here a few years down the line? How can I afford to get my child a degree beyond high school if they don't start with the same opportunity? And more broadly, how do we emerge from this pandemic, not just with a little breathing room, but with a real fighting chance to get ahead?

"They are the things that take place at the kitchen tables I grew up in..."

If recent polls are correct, the kitchen-table talk includes inflation concerns as prices rise for kitchen-table items (food) and for automobiles (gasoline).