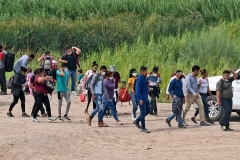 (CNSNews.com) - "Do you have plans to visit the southern border?" Anderson Cooper asked President Joe Biden at a CNN town hall Thursday night.

"I've been there before, and I haven't -- I mean, I know it well. I guess I should go down," Biden responded. (For the record, it's been many years since Biden visited the U.S.-Mexico border, if he ever has, that is.)

"But the whole point of it is, I haven't had a whole hell of a lot of time to get down," Biden continued:

I've been spending time going around looking at the $900 billion worth of damage done by -- by hurricanes and floods and weather and traveling around the world.

But, I plan on -- now, my wife Jill has been down. She's been on both sides of the river. She's seen the circumstances there. She's looked into those places.

But, there's much more to be done. And -- and I realize -- I think it is -- it's a thing that concerns me the most about being able to get control of it, because I got to, number one, get enough funding to provide for immediate determination of whether or not someone that is, in fact, legitimately claiming a right to stay in the country because of legitimate fears, and purely for economic reasons to get in line but not get in the country.

So what we're doing is bringing a lot of folks who are coming in, and they're doing ankle bracelets instead of people being sent back, depending on whether or not their claim appears to be legitimate.

Biden told the woman who asked the question that his administration is "making more progress than you think" on border issues, including the handling of minors. He said that only 504 children are now in the custody of the Border Patrol, down from 5,000, he said.

(Thousands of undocumented children have been released and shipped to other areas of the country, sometimes in the dark of night.)

Biden also took credit for devising a program "where we now provide funding" to Central American countries "to change the circumstance on the ground."

"For example, you're in a circumstance where, you know, people don't just sit around their kitchen table and say, I've got a great idea. Let's sell everything we have, give it to coyote, let them -- take us across the border, drop us in a desert, place they don't want us, won't that be fun?

"People do it because they're desperate. They're desperate," Biden said. "And what I've been trying to do, and I'm trying to do in this legislation as well, is get funding so we have funding for immigration officers to be able to hear cases immediately of whether or not they justify having asylum granted to them."

(He meant that immigration officers would hear asylum claims in the countries before would-be migrants started their journey.)

Some Democrats and immigration activists have blasted the Biden administration for maintaining Title 42, a public health authority implemented by the Trump administration's CDC, that requires the immediate deportation of adult aliens because of the COVID pandemic.

Biden defended it on Thursday: "We maintained that because of the extent of the -- of the continued extent of COVID in those countries from which people are coming. It's very, very high. "And so, we maintained the policy. We're not sending back children. We send back adults, and we send back large families. But we don't send back children in that circumstance.

"And so, that's why I have a proposal to provide for over a billion doses of COVID vaccine to the rest of the world, including a significant portion to Latin and Central America," Biden said.