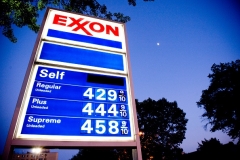 (CNSNews.com) - With the American public increasingly concerned about rising gas prices, President Biden on Thursday indicated he has no particular plan to stem the rise.

"I must tell you, I don't have a near-term answer," he said. "There's a possibility to be able to bring it down, depends on -- a little bit on Saudi Arabia and a few other things that are in the offing."

"Do you have a timeline for gas prices, when you think they may start coming down?" Anderson Cooper asked the president at the CNN town hall:

But, for example, for natural gas to heat your homes as winter's coming, there's a lot of -- what people don't realize, we put in billions of dollars into what we call LIHEAP.

LIHEAP is the provision whereby you're able to get funding from the federal government based upon your need to heat your home. And it's subsidized in a significant way. And there's billions of dollars we had passed in the legislation I got passed in March of this year. Because we anticipated that would be a problem as well.

But the answer ultimately is -- ultimately meaning the next three or four years -- is investing in renewable energy.

In his push for green energy, Biden has targeted fossil fuels, signing executive orders pausing oil and gas leasing on federal lands and scrapping the Keystone pipeline as soon as he took office.

As U.S. production has decreased, the Biden administration recently asked OPEC to increase its production, but OPEC refused. Biden mentioned that at the town hall:

"And we're about $3.30 a gallon most places now...And that's because of the supply being withheld by OPEC. And so there's a lot of negotiation that is -- there's a lot of Middle Eastern folks who want to talk to me. I'm not sure I'm going to talk to them. But the point is it's about gas production. There's things we can do the in meantime, though."

Biden predicted a "dramatic drop" in gas prices in the "next two or three years" as his plan to move Americans to electric cars unfolds:

"So what will happen is, you're going to see a dramatic drop, a dramatic drop in what's going to happen in terms of gas prices as we go into the next two or three years, even if we're not able to break the monopoly price they're keeping it up because -- anyway. So there's -- but I don't -- I must tell you, I don't have a near-term answer.

Biden mentioned "two things I could do."

"I could go in the Petroleum Reserve and take out and probably reduce the price of gas maybe 18 cents or so a gallon. It's still going to be above 3 bucks...But it's going to be hard. It's going to be hard. There's a possibility to be able to bring it down, depends on -- a little bit on Saudi Arabia and a few other things that are in the offing."