Biden Going to Highland Park? WH: No Plans Right Now'--But Biden 'Had a Moment of Silence' 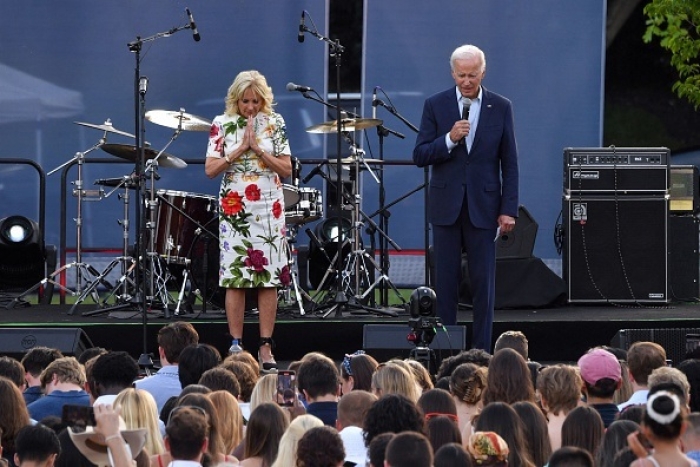 President Joe Biden andFirst Lady Jill Biden bow their heads during a moment of silence for the victims of the Highland Park shooting on July 4. (Photo by NICHOLAS KAMM/AFP via Getty Images)

Twelve days after Buffalo, Biden visited Uvalde, Texas, the scene of another horrific massacre on May 24 by another troubled young white man who gunned down 19 children and two teachers in their classroom.

President Biden told reporters yesterday, in an offhand remark, he's "not sure" if he'll go to the Chicago suburb of Highland Park, where yet another troubled young white man killed seven people and injured many more when he fired into a July 4th parade from a rooftop on Monday.

"The vice president is going to be there, and she will speak to the devastation that we -- that we all saw with our own eyes yesterday in Highland Park. But I don't have anything to share about the president's travel tomorrow. He'll go to -- again, he'll go to Ohio, where he's going to talk about the rescue plan, the Special Finance -- Financial Assistance Program in particular.

"This program will provide financial relief to millions of workers in multi-employer plans who face significant cuts to their pensions through no fault of their own. But again, nothing to share about him going to Chicago at this time."

A reporter asked, how about "later this week, next week?"

"I -- I -- we just don't have anything to share. But again, the vice president's going to be there today. She will certainly speak to -- speak to the tragedy that we saw yesterday," Jean-Pierre said.

"The president spoke to this yesterday during the 4th of July in a very forceful way in -- in laying out how he and -- and the first lady saw the tragedy. He even had a -- a moment of silence. But we are not planning -- right now at this moment, I don't have any plans of a future trip to Chicago."

Jean-Pierre also could not say if President Biden would visit Akron, Ohio, where police fired some 60 bullets into a young black man named Jayland Walker after a traffic stop.

"I don't have anything to share on that either, whether he is going to potentially -- I know it's about 45 minutes from Cleveland where the shooting happened," Jean-Pierre said.

"We just are -- right now we're going to be focusing on the trip that we have planned, which is to talk about the American rescue plan and how to help the American public."