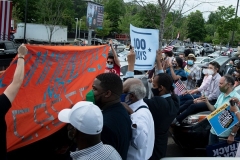 "Abolish ICE," they shouted, holding up a large orange banner that read, "communities not cages." Biden could not read the banner because it faced the crowd.

Biden, distracted, paused several times to listen to the protesters. He also responded to them:

Six days after taking office, Biden signed an executive order directing the Justice Department not to renew contracts with privately operated "criminal detention facilities." But those are separate from immigration detention centers.

So far, Biden has not endorsed calls from the left to abolish Immigration and Customs Enforcement (ICE). However, earlier this month, his administration ordered ICE and Border agents to change their language as it relates to illegal aliens.

The following words are now forbidden:

Instead, ICE and CBP must say: