Biden to Coast Guard Grads: 'You're a Really Dull Class. I Mean, Come On, Man. Is the Sun Getting to You?' 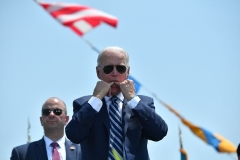 President Joe Biden uses his fingers to whistle during the US Coast Guard Academys 140th commencement exercises on May 19, 2021 in New London, Connecticut. (Photo by NICHOLAS KAMM/AFP via Getty Images)

(CNSNews.com) - President Joe Biden addressed graduates of the U.S. Coast Guard Academy in New London, Connecticut on Wednesday, beginning his speech with lots of joking references to life at the academy -- jokes intended to warm up his audience.

But it appears the effort fell rather flat. Several times, Biden told the graduates they could clap for his one-liners, some of which he fumbled.

And at one point, after Biden misquoted a basic Coast Guard tenet, he told the graduates, "You are a quiet -- you're a really dull class. I mean, come on, man. Is the sun getting to you? I would think you'd have an opportunity when I say that about the Navy to clap, but -- but being here together -- but all kidding aside, being here together is a victory in and of itself...”

Biden made the "dull class" comment after misquoting the "basic response" cadets are required to give when asked, "What is the Coast Guard?"

The answer: "The hard nucleus about which the Navy forms in times of war."

But Biden fumbled the quote, saying, "I can only assume that you will enjoy educating your family about how the Coast Guard is, quote, "The hard nucleus around the Navy forms in times of war."

Here is a transcript of that portion of Biden's speech to graduates:

But I hope today you take the time to reflect on how much all of the hard work and extra -- extra effort you engaged in was worth. And I hope that you take immense pride -- immense pride in all that time at the Academy and all the Academy has given to you.

Because you've achieved something few others can claim: You survived R-Day and Billet Night. You made it through Swab Summer. You got a haircut that showed every damn bump on your head. You learned to square the corners and square your medals -- look, your meals, I should say.

And you memorized -- and this the part I found would have been hard -- memorized Running Lightning [he meant "Running Light," the Coast Guard handbook]. I'm going to ask you all to stand up and repeat it. No, I'm only kidding.

You earned your shoulder boards and your aiguillettes. You passed through 100th week, and maybe spent a little too much time at the Slice. You can clap. Come on, man! You're moving on. Show a little courage.

And then, like all the students across the country, you had to figure out what it meant to finish your second-year class [he meant "second-class year"] in virtual ins- -- with virtual instruction.

The pandemic upended so much of our lives. As was mentioned several times so far, last year's graduating class didn't get to have this ceremony in-person. But the Coasties fashion that you all have -- you met the threat head on.

You adapted, showed your resilience, and you led. The class of '21, you were the ones to test and improve the restricted movements protocols that allowed you to return to class on campus. And with careful precautions and regular testing, you were able to go back to your lives and training here in New London, to conduct your first-year class [he meant “first-class year”] in person.

It certainly looked and felt different, I'm sure. But you found ways -- you found ways to keep many of the Academy's traditions alive, and maybe even formed a few new ones. You still were able to bring your cars on campus; you just weren't allowed to go anywhere in those cars.

Man, I tell you what, I'd have trouble watching my car sit there. But maybe dipping your ring in Crown Park or having your Ring Dance outside will be a new standard. The Super Bowl of Inter-Company sports may become an annual event.

And by the way, congratulations to Bravo Company, by the way, for -- on your victory. You can clap. It's okay. Even if you lost, you got to clap.

And though everything you found -- through it all, you found ways to excel in the classroom and athletics. You've got nine All-Americans in your ranks today, including a record-setter in the track and field 5,000 meters.

And most importantly -- most importantly, you had each other's backs. When times got hard, you were there for one another. That's something you all learn quickly at the Academy. You can't crew the Tall Ship Eagle without working together; it's not possible. So, the pandemic didn't change that, but it made it more important.

I know we wish more of your loved ones could be here today to celebrate with you in person, packed into the stands for your big day, especially because so many of you come from families of proud traditions of service.

First Class Rachel Piche is about to become the third-generation Academy grad. Meanwhile, First Class Jacquelyn Tidd bucked a long tradition in her family and joined the Coast Guard over -- came to the Coast Guard Academy over the Naval Academy, unlike her mother, father, uncle, and grandfather.

Well, Cadet Tidd, there's a seat on Air Force One if you have to get home. It may be tough. I can only assume that you will enjoy educating your family about how the Coast Guard is, quote, "The hard nucleus around the Navy forms in times of war."

You are a quiet -- you're a really dull class. I mean, come on, man. Is the sun getting to you? I would think you'd have an opportunity when I say that about the Navy to clap, but -- but being here together --

But all kidding aside, being here together is a victory in and of itself. An important marker in the progress we've made to turn the tide of this pandemic. It's a testament to the skill and military discipline and sense of responsibility you already embody. So there is no doubt in my mind that the 140th graduating class of the United States Coast Guard Academy will reflect -- will reflect the very best of our country in the proudest tasitions ["traditions"] of our service...

Biden, in keeping with tradition, then "absolved" the cadets for "minor infractions," joking about how much he would have enjoyed "absolution" at his own graduation from the University of Delaware for "minor infractions like using a fire extinguisher to hose down an RA, but other than that, nothing much."

Then the president launched into his familiar speech: "The world is changing. We're at a significant inflection point in world history...."