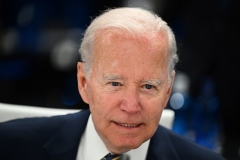 President Joe Biden concludes his participation in the NATO summit in Madrid, Spain on June 30. (Photo by GABRIEL BOUYS/AFP via Getty Images)

(CNSNews.com) - Speaking in Madrid on Thursday, President Joe Biden condemned the "outrageous behavior of the Supreme Court" in overturning Roe v. Wade, and he said the Senate should make an “exception” to the filibuster if that's what it takes to codify the right to abortion.

A reporter asked Biden, "What further specific executive actions are you considering in response to the Roe ruling, and would you declare a public health emergency as several Democrats are calling on you to do?"

Biden said he's meeting with a group of governors when he returns home on Friday, "and I'll have announcements to make then," he said.

"And so I'm going to be talking to the governors as to what actions they think I should be taking as well, and -- but the most important thing to be clear about is, we have to change -- I believe we have to codify Roe v. Wade in the law, and the way to do that is to make sure the Congress votes to do that.

Biden then called on NBC's Kelly O'Donnell, who told him, "You just made some news saying you would support changing the filibuster rules to codify abortion rights broadly across the country."

O'Donnell asked Biden for his opinion on "the integrity and the impartiality of the Supreme Court -- should Americans have confidence in the court as an institution? And your views on abortion have evolved in your public life. Are you the best messenger to carry this forward (as) Democrats, many of them, many progressives, want you to do?

"I'm the president of the United States of America. That makes me the best messenger. And I really think that it's a serious, serious problem that the court has thrust upon the United States.

"And they've just wiped it all out. And so I'm the only president they got, and I feel extremely strongly that I'm going to do everything in my power, which I legally can do, in terms of executive orders as well as push the Congress and the public.

"The bottom line here is, if you care, if the polling data is correct and you think this decision by the court was an outrage or a significant mistake, vote. Show up and vote. Vote in the off year, and vote, vote, vote. That's how we'll change it."

Biden ended the news conference there, telling objecting reporters, "there's no such thing as a quick one (question). I'm out of here."

He was a little confused about which way to exit the stage.