Biden Blames the 'Gun Lobby,' Warns Republicans: 'We Need to Let You Know That We Will Not Forget' 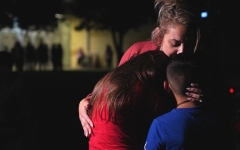 Families hug after the mass shooting in Uvalde, Texas, on May 24, 2022. (Photo by ALLISON DINNER/AFP via Getty Images)

(CNSNews.com) - "I am sick and tired of it.  We have to act.  And don’t tell me we can’t have an impact on this carnage," an emotional President Biden said Tuesday night, following a horrific shooting at the elementary school in Uvalde, Texas.

An 18-year-old high school student armed with a semi-automatic weapon shot and killed at least 19 children and two teachers.

The president blamed the "gun lobby," the reflexive response of people who believe gun bans are the solution. There was no mention of hardening schools with metal detectors or other serious security measures used to prevent mass shootings at airports, government buildings, even museums.

"I spent my career as a senator and as vice president working to pass commonsense gun laws. We can’t and won’t prevent every tragedy. But we know they work and have a positive impact.  When we passed the assault weapons ban, mass shootings went down. When the law expired, mass shootings tripled.

"The idea that an 18-year-old kid can walk into a gun store and buy two assault weapons is just wrong. What in God’s name do you need an assault weapon for except to kill someone? Deer aren’t running through the forest with Kevlar vests on, for God’s sake. It’s just sick.

"And the gun manufacturers have spent two decades aggressively marketing assault weapons, which make them the most and largest profit. For God’s sake, we have to have the courage to stand up to the industry."

Biden said the U.S. has far more mass shootings than other countries, but those countries also have people with mental health problems and domestic disputes: "Why are we willing to live with this carnage? Why do we keep letting this happen? Where in God’s name is our backbone to have the courage to deal with it and stand up to the lobbies?" Biden asked.

Biden also warned Republicans and others who support the right of law-abiding citizens to own guns:

"For every parent, for every citizen in this country, we have to make it clear to every elected official in this country: It’s time to act. It’s time. For those who obstruct or delay or block the commonsense gun laws, we need to let you know that we will not forget."

'What are our children worth?'

Andrew Pollack, whose daughter Meadow was murdered in the 2018 Parkland, Florida school shooting, told Fox News Tuesday night, how the mass murder in Uvalde might have been prevented:

He told parents it’s their responsibility to "check where your kids go to school, you need to go back to the school and see, is there a single point of entry? Do you have guards at the school?

"I got a message tonight, made me feel kind of good, from someone. They told me thanks. They thanked me because they listened to me. And they sent, they took their kid out of public school and put him in a private school. Because a lot of these private schools, they take security way more serious. So, parents, it's your responsibility where you bring your children, and you have to know."

“How many policemen could we have paid with $40 billion to be at schools, or to put in the glass that we need? Or the metal detectors in some of these -- in some areas or bulletproof glass? What could we have done with that $40 billion? So, when you hear politicians...either side, they voted to send $40 billion to Ukraine, and we could use it here in this country.

"Americans are suffering, and look what happened now, at the school. It really angers me, because I don't want to hear that we don't have budget to protect our children. That's not right."

Ingraham made the point that 51 people were shot and killed in Chicago, just in the month of April:

"And that's where a liberal mayor has presided for as long as I can remember. And so far this year, by the way, 218 people have been killed in Chicago. Have you heard Biden give an impassioned address about any of that? He doesn't speak about this. No Democrat really does, not even Lori Lightfoot, not much.

"Now we know why, because those victims, they're able to go nameless and faceless, because the elites kind of find their deaths irrelevant. Because those deaths cannot be used at least they think they can't be used, or they wouldn't be efficient to use them for political benefit.

"But we actually believe those victims' lives matter...So, after all this horrific news, I will still say this: Americans know a phony when they see one. And any politicians, I don't care if you're Republican, Democrat or somewhere in between, and you're seeking to use what happened today to help yourself, you should be ashamed of yourself.