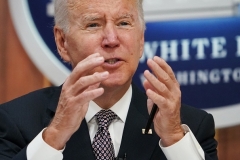 The interviewer noted that Biden has said the economy is strong: "But then you’ve got serious economists who warn of a recession next year. What should Americans believe?" he asked the president.

"They should just say, let’s see. Let’s see, which is correct. And from my perspective, you talked about a recession. First of all, it’s not inevitable. Secondly, we’re in a stronger position than any nation in the world to overcome this inflation. It’s bad.

“Isn’t it kind of interesting? If it’s my fault, why is it the case in every other major industrial country in the world that inflation is higher? You ask yourself that? I’m not being a wise guy. Someone should ask themself that question. Why? Why is it?

"If it’s a consequence of our spending, we’ve reduced the deficit. We’ve increased employment, increased pay. There was a survey done uh, uh, by the, uh, I forget which one it was, which one it was now, about three months ago. You had more people had lower debt (inaudible) credit cards, more savings in their savings account, higher pay in the job they had, more satisfaction in the job they had, and they were in good shape financially."

Biden admitted that the American people are "really down," and he blamed "the failure of the last administration to act on COVID." (The last administration actually speeded the development of COVID vaccines, and Biden has so far failed in his promise to get COVID under control, as new variants keep spreading.)

"I think (Surgeon-General) Vivek Murthy is right and most of the international and National Psychological Association, whatever it’s -- people are really, really down," Biden said.

"They’re really down. Their need for mental health in America has skyrocketed because people have seen everything upset. Everything they counted on, upset.

"But most of it’s a consequence of, of, of what’s happening, what happened is a consequence of the, the COVID crisis. People lost their jobs. People are out of their jobs. And then, were they going to get back to work? Schools were closed. Think of this. I think we vastly underestimate this," Biden said.

"Think about what it’s like for the graduating classes of the last three years. No proms. No graduation. No, no, none of the things that celebrate who we are.

"Think about it across the board. How isolated we’ve become. How separated we’ve become. Even practical questions like, you know, can you go out on a date? I mean (inaudible) the normal socialization, how does that take place?

"There’s overwhelming evidence it’s had a profound impact on the psyche of parents, children, across the board. And we lost a million people. And nine for every, according to a study, of those million people, nine significant family or close friends were left alive after they’re gone."

"So you’re talking about a country that has undergone profound psychological trauma," the interviewer said. " What can you as a president do to address that psychology to make people feel more optimistic," he asked Biden.

"Be confident. Be confident," Biden said. "Because I am confident. We are better positioned than any country in the world to own the second quarter of the 21st century. That’s not hyperbole. That’s a fact."

"You could argue whether it had a marginal, minor impact on inflation. I don’t think it did," Biden said. "And most economists do not think it did. But the idea that it caused inflation is bizarre."

Biden said he "fully" understands "why the average voter out there is just confused and upset and worried."

"And they’re worried, for example, you know, can they send their kid back to, back to college? What’s going to happen? Are we going to take away the ability of people to borrow? So I think there’s a lot of reasons for people to want to know what comes next.

"One, prescription drugs. Reduce utility bills by providing for, uh, I think, we’ll be able to get the ability to have a tax incentive for winterization, which would, they estimate, bring down the average bill for the family, normal home, 500 bucks a year.

"I think we would be able, we’re gonna get another $57 billion for semiconductors, so we don’t have the supply chain problem we had before, keeping down the cost of vehicles. I think we’re going to be in a situation where, we’re gonna — I know we are — where we’re going to reduce a person’s average internet bill by 30 bucks a month, because we have the money through the, through the uh, uh, infrastructure bill to provide internet across country.