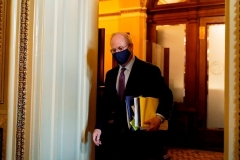 David Schoen, lawyer for former President Donald Trump, walks off the Senate floor during a break in the second impeachment trialon February 9, 2021. (Photo by ANDREW HARNIK/POOL/AFP via Getty Images)

Earlier Tuesday, Schoen demonstrated some of the pain he's feeling when he actually choked up at the conclusion of his argument that the trial is unconstitutional.

After quoting Abraham Lincoln, Schoen read part of a poem by Henry Wadsworth Longfellow -- one of Lincoln's favorite poets, an emotional Schoen said.

Longfellow wrote the poem in 1849, Schoen noted, "at a time fraught with division and risk...The message from that other time of division is a call for hope and unity, and to bring strength -- has special meaning today," Schoen said.

Sail forth into the sea, O ship!
Through wind and wave, right onward steer!
The moistened eye, the trembling lip,
Are not the signs of doubt or fear.
Sail forth into the sea of life,
O gentle, loving, trusting wife,
And safe from all adversity
Upon the bosom of that sea
Thy comings and thy goings be!
For gentleness and love and trust
Prevail o'er angry wave and gust;
And in the wreck of noble lives
Something immortal still survives!

Thou, too, sail on, O Ship of State!
Sail on, O Union, strong and great!
Humanity with all its fears,
With all the hopes of future years,
Is hanging breathless on thy fate!
We know what Master laid thy keel,
What Workmen wrought thy ribs of steel,
Who made each mast, and sail, and rope,
What anvils rang, what hammers beat,
In what a forge and what a heat
Were shaped the anchors of thy hope!
Fear not each sudden sound and shock,

Later, in Schoen's interview with Sean Hannity, the poem was not mentioned.

Instead, Schoen told Hannity the House impeachment managers are trying to "trick" the American people with the professionally produced video they played at Tuesday's proceedings, mixing Trump's words with images of the rioting.

"It's very easy to stand up and show spliced and manufactured films," Schoen said: "Literally, you know, the Democrats, the House managers apparently hired a large movie company and a large law firm to put together this thing.

"It's just -- it's a matter of tricking the American people to play -- as if the rioting was going on in real time with the speech, what's the purpose of that? Why do we want to trick the American people? And, listen, they have great entertainment value. People are glued to, you know, a movie that's made professionally like that. But that's not going to advance the cause -- any cause of good in the country."

Earlier on Tuesday, Schoen argued against the constitutionality of impeaching a former president who is now a private citizen. He returned to that subject on Tuesday night:

It's common sense, nobody thinks of using the impeachment process for anything other than removing a civil official from office. We have courts. If you want to have an investigation, if you want to prosecute someone, or something like that, we have the courts for that. That's not what impeachment is for.

But, you know, we talked about the language in the Constitution today, that sort of thing. It's just -- to me, it's absolutely nonsense. The president is no longer the president right now, and he's a person who can't be removed from office. He's a private citizen.

This is what our Founding Fathers are very much against, having a legislative body try a private citizen. Think about it, he doesn't get any of the benefits or safeguards that our Constitution provides for someone who has an actual trial. They put that -- that videotape would never go into evidence anywhere in the world today. It's a spliced tape showing what they want to show.

One thing the Democrats did not show in their videotape was Trump urging people to march to the Capitol "peacefully" and "patriotically" to make their voices heard.

Schoen said it's "dangerous" to take the position that Trump's speech incited an insurrection.

Doing so "would absolutely chill passionate political speech," he said.

"If you really read the speech and watch it, he calls for -- when he uses the word "fight," it's in the context of a legislator fighting or something like that."

Schoen noted that Donald Trump is a "passionate person." He said the second impeachment is sending "a very dangerous and wrong message, and it's a -- it's a hoax, I'm sorry to say."