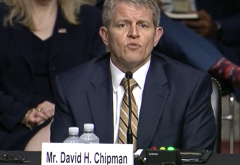 (CNSNews.com) - David Chipman, the former ATF-agent-turned-gun-control-activist, told Congress on Wednesday that he supports a ban on AR-15s and other semi-automatic rifles "as has been presented in a Senate bill and supported by the president."

But if it were up to him, Chipman would go further than banning so-called "assault weapons."

Chipman told the Senate Judiciary Committee that in his work as a gun control activist, he has advocated for placing regulatory burdens on Americans who currently own the AR-15 and similar firearms:

"So you want to ban the most popular rifle in America," Sen. Ted Cruz (R-Texas) told Chipman at the confirmation hearing.

Sen. Cruz noted that Sen. Dianne Feinstein's gun control bill, which was defeated by a Democrat-led Senate in 2013, would have banned the sale, transfer, importation and manufacture of "some two thousand specified firearms." But Feinstein's bill did not affect Americans who already owned such guns, should the ban have taken effect.

"What I did say is that Sen. Feinstein's bill did not address those firearms that are currently in the possession of Americans, and then I did share with you my view as an advocate, which would be quite different than someone actually enforcing the law on the books, that those firearms could be treated under the NFA [National Firearms Act] and regulated that way, which would deal with those currently in the possession of Americans."

Sen. Cruz followed up: "So when you say it didn't go far enough, you mean that you don't just want to ban the manufacture of those rifles, you don't just want to make it illegal to sell those rifles, but you want to actively have government go after the people who currently possess firearms, and if they don't register and submit to all of the onerous restrictions under the National Firearms Act, presumably confiscate their weapons?"

"Senator, what I've said publicly is that, as an advocate, I prefer a system where the AR-15 and other assault weapons are regulated under the National Firearms Act," Chipman said.

Sen. Cruz did not press him any further.

The National Firearms Act of 1934 requires the owners of specified firearms (and suppressors) to register and pay a tax to the federal government.

According to the ATF:

The NFA was originally enacted in 1934. Similar to the current NFA, the original Act imposed a tax on the making and transfer of firearms defined by the Act...The law also required the registration of all NFA firearms with the Secretary of the Treasury.

"While the NFA was enacted by Congress as an exercise of its authority to tax, the NFA had an underlying purpose unrelated to revenue collection. As the legislative history of the law discloses, its underlying purpose was to curtail, if not prohibit, transactions in NFA firearms. Congress found these firearms to pose a significant crime problem because of their frequent use in crime, particularly the gangland crimes of that era such as the St. Valentine’s Day Massacre.

The $200 making and transfer taxes on most NFA firearms were considered quite severe and adequate to carry out Congress’ purpose to discourage or eliminate transactions in these firearms. The $200 tax has not changed since 1934.

At Wednesday's hearing, Chipman told the committee that he was issued an AR-15 when he was a member of ATF's SWAT team, "and it's a particularly lethal weapon," he said. "And regulating it as other particularly lethal weapons, I have advocated for. As ATF director, if I'm confirmed, I would simply enforce the laws on the books, and right now there is no such ban on those guns."

But President Joe Biden has repeatedly urged Congress to pass another ban on "assault weapons and high-capacity magazines."