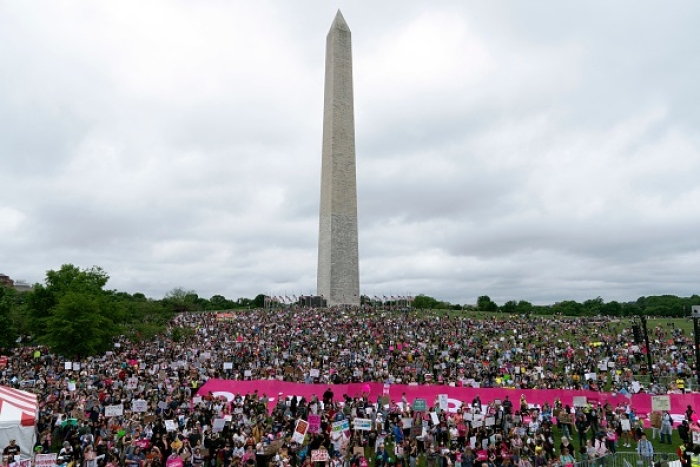 Abortion rights activists rally at the Washington Monument before a march to the US Supreme Court in Washington, DC, May 14, 2022. (Photo by JOSE LUIS MAGANA/AFP via Getty Images)

(CNSNews.com) - In March 2021, Arkansas Gov. Asa Hutchinson signed a bill banning abortion in all cases, "except to save the life of the mother in a medical emergency."

There is no exception for rape or incest, and even as he signed the bill, Hutchinson expressed concern about those omissions, despite his "sincere and long-held pro-life convictions."

On Sunday, Hutchinson again expressed reservations about the Arkansas law, telling CNN's "State of the Union" that he's had to deal with rape and incest circumstances as governor:

"And while it's still life in the womb, life of the unborn, the conception was under criminal circumstances, either incest or rape. And so those are two exceptions I recognize, I believe, are very appropriate.

"And what will happen as time goes on if Roe versus Wade is reversed, these are going to become very real circumstances. I think the debate and discussion will continue and that very well could be revisited."

Host Dana Bash asked Hutchinson, what if those exceptions are not allowed? "That means...11- and 12-year-olds might be in this situation, in a very real way, in just a couple of months, potentially."

"And that's where, in the last few years when we passed these trigger laws, we're expressing a belief. We're trying to return that authority to the states and to reduce abortions, but whenever you see real life circumstances like that, that debate is going to continue, and the will of the people may or may not change,

"But it's going to come back to the states' flexibility on that. I believe that those exceptions are going to be important overall to save lives because the public understands those exceptions, the importance of it.

"So I think that will be revisited. There's no guarantee of that, but the public opinion does matter whenever you come to your elected representatives."

Last week, a federal judge blocked the Arkansas abortion ban from taking effect under the trigger law, while abortion activists challenge the near-total ban in the courts.

Host Dana Bash also asked Hutchinson whether Arkansas should change its system to "hold men equally responsible for the children they're bringing into the world?"

"They should be held equally responsible, both in terms of paternity responsibilities, child support -- absolutely that should happen," Hutchinson said. "And if we can speed up the system to be able to accomplish that, then absolutely we should do that.

"And we talked about the difficult circumstances, the state does have a responsibility to help in terms of maternal health care, in terms of the child. And maybe in these circumstances, making sure that there's the assistance that's needed. So we need to have wrap-around services if there is those unexpected pregnancies that are traumatic or challenging," Hutchinson said.

"Do you really think that your state is prepared to protect and care for even more children if abortion does become illegal there?" Bash asked the governor.

"We've had historic challenges with poverty in Arkansas," he agreed.

"But you're talking about access to health care. Under my leadership, we continued the Medicaid expansion so we've improved health care access in our state. We've increased the support for foster parents and foster children. That's been a high priority.

"And so we are addressing those needs. Obviously there's always opportunity to do more. And we have to address this issue with compassion because of the difficult circumstances and the fact you're dealing with the most vulnerable of our population. So, absolutely, we need to continue to address the issues that you just spoke about and to make sure we're providing good answers and support that's needed."