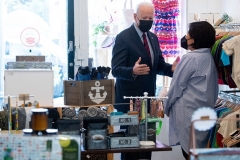 President Joe Biden shops for gifts at Honey Made, a small business in Washington, D.C., on January 25, 2022 in a show of support for small business. (Photo by SAUL LOEB/AFP via Getty Images)

(CNSNews.com) - Even before the Bureau of Labor Statistics released its January employment report, the Biden administration signaled that it was expecting a "blip" in today's data.

Commerce Secretary Gina Raimondo told CNN on Thursday morning that "this will be an an unusual month, potentially," because of the surge in omicron cases during the reporting period.

This morning, BLS delivered the "blip" referenced by Raimondo, but it was a very positive one:

The economy added 467,000 payroll jobs in January, way above the consensus estimate of +150,000. Some analysts were expecting 6-figure job losses for January.

Impressively, the labor force participation rate increased by 0.3 points to 62.2 percent in January.

In January, the civilian non-institutional population in the United States was 263,202,000. That included all people 16 and older who did not live in an institution, such as a prison, nursing home or long-term care facility.

Of that civilian non-institutional population, 163,687,000 were participating in the labor force, meaning they were either employed or unemployed -- they either had a job or were actively seeking one during the last month. This resulted in a labor force participation rate of 62.2 percent in January -- up three-tenths of a point from the 61.9 percent in December, and the highest participation rate of Biden's presidency. It was 61.4 percent when Biden took office.

The labor force participation rate reached a seven-year high of 63.4 percent in January 2020, the final year of Trump's presidency and just before the onset of COVID.

In another positive trend, the number of Americans counted as "not in the labor force," meaning they don't have a job and don't want one, continued its downward trend, settling at 99,516,000 in January, the lowest it has been since Biden took office. This number has been generally rising in recent years because of retiring baby boomers. It reached a record high of 103,538,000 in April 2020, as the pandemic took hold.

In January, 6.0 million persons reported that they had been unable to work because their employer closed or lost business due to the pandemic--that is, they did not work at all or worked fewer hours at some point in the 4 weeks preceding the survey due to the pandemic. This measure is considerably higher than the level of 3.1 million in December.

Among those who reported in January that they were unable to work because of pandemic-related closures or lost business, 23.7 percent received at least some pay from their employer for the hours not worked, up from the prior month.

Among those not in the labor force in January, 1.8 million persons were prevented from looking for work due to the pandemic, up from 1.1 million in the prior month. (To be counted as unemployed, by definition, individuals must be either actively looking for work or on temporary layoff.)

Notable job gains continued in leisure and hospitality, in professional and business services, in retail trade, and in transportation and warehousing.

In any given month, the way we collect the data, it's just a snapshot in time. And this past month, due to omicron, this snapshot in time happened at the height of omicron.

So, for example, if somebody was out sick for the week, they'd be counted potentially as unemployed. They're not unemployed. So the bottom line, and I say this every month, you can't take too much out of any one month's numbers because it's a snapshot in time. You have to look at the trend, and the trend is enormously strong.

You know, creating over 6.5 million jobs last year, wages are up, unemployment is down. America's the only economy in the world that's stronger now than it was pre-pandemic. So, you know, as I say, it's just a snapshot, but by any measure, our economy is strong and growing and you know, we're -- we're very pleased with that.

(BLS defines employment as "the total number of persons on establishment payrolls employed full- or part-time who received pay -- whether they worked or not -- for any part of the pay period that includes the 12th day of the month.")