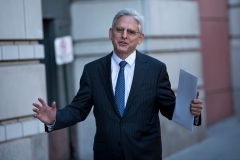 (CNSNews.com) - Merrick Garland, tapped to be President Biden's attorney general, told his confirmation hearing on Monday that his top priorities include going after "white supremacists."

"If confirmed, I will supervise the prosecution of white supremacists and others who stormed the Capitol on January 6 -- a heinous attack that sought to disrupt a cornerstone of our democracy: the peaceful transfer of power to a newly elected government," Garland's prepared statement reads:

That critical work is but a part of the broad scope of the Department's responsibilities. DOJ protects Americans from environmental degradation and the abuse of market power, from fraud and corruption, from violent crime and cybercrime, and from drug trafficking and child exploitation.

And it must do all of that without ever taking its eye off the risk of another devastating attack by foreign terrorists. The Attorney General takes an oath to support and defend the Constitution of the United States against all enemies -- foreign and domestic. I am mindful of the tremendous responsibility that comes with this role.

Later, Sen. Dianne Feinstein (D-Calif.) asked Garland, "What steps will you take to ensure that the perpetrators of the attack on our Capitol are brought to justice?"

Senator, I think this was the most heinous attack on the democratic processes that I’ve ever seen and one that I never expected to see in my lifetime,” Garland responded.

One of the very first things I will do is get a briefing on the progress of this investigation. I intend to give the career prosecutors who are working on this matter 24/7 all the resources they could possibly require to do this.

And at the same time, I intend to make sure that we look more broadly, to look at where this is coming from, what other groups there might be that could raise the same problem in the future, and that we protect the American people.

And I know that the FBI director has made the same commitment.

'We do not yet have equal justice'

Pointing to the origins of the Justice Department in his opening statement, Garland noted that it was founded 150 years ago, during Reconstruction, "to secure the civil rights promised by the 13th, 14th and 15th Amendments."

"The first Attorney General appointed by President Grant to head the new Department led it in a concerted battle to protect black voting rights from the violence of white supremacists, successfully prosecuting hundreds of cases against members of the Ku Klux Klan," Garland said.

Almost a century later, the Civil Rights Act of 1957 created the Department's Civil Rights Division, with the mission "to uphold the civil and constitutional rights of all Americans, particularly some of the most vulnerable members of our society."

That mission remains urgent because we do not yet have equal justice. Communities of color and other minorities still face discrimination in housing, education, employment, and the criminal justice system; and bear the brunt of the harm caused by pandemic, pollution, and climate change.