AG Barr: 'Operation Legend Is Working. Crime Is Down, and Order Is Being Restored' 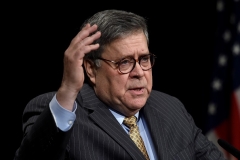 "I am pleased to report that Operation Legend is working. Crime is down, and order is being restored to this great American city," said Barr at a Wednesday morning news conference in Chicago.

Barr said Operation Legend has dispatched more than one thousand skilled federal agents to Chicago and eight other cities to fight violent crime. Those agents have now made 2,500 arrests, and of those arrested, prosecutors have brought federal criminal charges against 600 defendants.

"Bringing federal charges is significant because defendants arrested for violent crimes are often detained before trial, unlike state defendants who are too often released." Barr also noted that federal defendants face serious sentences if convicted, with the real possibility of long-term imprisonment in out of state facilities.

"Knowing that, many of the arrestees cooperate with the government and lead to even more violent offenders, such as leaders of gangs or drug organizations."

Barr said the strategy of taking violent offenders off the street and forcing crime rates down is working, and he gave numbers to back that up:

In Kansas City, violet crime has dropped by 32 percent since we launched Operation Legend, with homicides down 18 percent and aggravated assault down a remarkable 47 percent.

In St. Louis, homicides have dropped by 47 percent in the four weeks since Operation Legend began; and more than 120 defendants have already been charged federally.

In Milwaukee, nonfatal shootings have dropped by 25 percent in the five weeks since the operation began.

"Operation Legend's success is perhaps most dramatic here in Chicago," Barr continued. "When the operation was announced on July 22, homicides in the city were up 51 percent over 2019. Over the previous weekend, more than 60 people had been shot in Chicago with over a dozen fatalities.

"Other violent crime, including looting and rioting, was increasing also. And the signs pointed to the problem getting even worse with the campaign to demonize and defund the police gaining traction, and criminals increasingly believing they could operate with impunity."

Barr said federal agents and grant money, working in partnership with local law enforcement, have now made more than 500 arrests in Chicago, and of those, 124 people face federal charges. "Many of those defendants are now detained pending trial rather than causing harm on the streets."

"The bottom line is that Operation Legend has played a critical role in cutting Chicago’s murder rate roughly in half since before the operation."

Barr called it unfortunate that many states are reverting to a "revolving door" system of justice, where defendants are not detained until trial but are released back into the streets. Barr said pretrial detention is an "essential element" of community policing, because people will not cooperate with police if they know the perpetrator will be released back into the neighborhood.

Operation Legend is named after four-year-old Legend Talifaro, who was shot and killed in his sleep.

"The purpose of the operation is to make clear that his life mattered, his name should be remembered, and other innocent victims like him -- including the eight-year-old girl killed in Chicago on Labor Day -- should not suffer such senseless deaths," Barr said.

He noted that on August 13, authorities arrested the suspected murderer of Legend Talifaro.