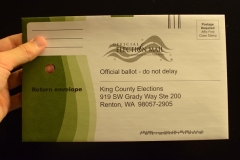 (CNSNews.com) - Attorney General William Barr on Thursday said "it is grossly irresponsible" for Democrats to be pushing vote-by-mail, using the coronavirus as the reason for more states to join the five that already have mostly mail-in systems.

Barr called it "playing with fire" and said "it could create serious questions" about the integrity of the upcoming election.

President Trump told a Thursday news conference that absentee ballots -- which people must request -- "are fine."

"But the universal mail-ins that are just sent all over the place, where people can grab them and grab stacks of them and sign them and do whatever you want, that's the thing we're against," Trump said.

Trump said he's unwilling to give the Postal Service billions of dollars, demanded by Democrats, to expand mail-in voting. It's one of the many sticking points in negotiating another coronavirus relief package.

We've had very close races in recent history, the country is divided. If anything, we should be assuring the integrity of our elections, so that government going forward will be legitimate and will be accepted as legitimate. The idea of conducting elections by wholesale mail-in ballots is reckless and wrong. Everyone knows what has happened in these cases.

I have friends who haven't lived in California in 21 years who receive ballots. There are ballots left in boxes in apartment buildings. Ballots that are for people who used to live at addresses are delivered to those addresses, they can be filled out by anybody.

This is reckless, and it could create serious questions about the integrity of the election. And to do this when there are -- closely divided country, as we are, is playing with fire, in my view.