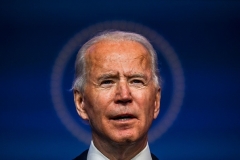 Democrat Joe Biden is photographed in a halo of light. (Photo by CHANDAN KHANNA/AFP via Getty Images)

(CNSNews.com) - President-elect Joe Biden thanked election officials at the local level for an "honest, free and fair" election on Monday.

"We owe these public servants a debt of gratitude. They didn't seek the spotlight. You know – and our democracy survived because of them, which is proof once more that it’s everyday Americans, infused with honor, character and decency, that is the heart of this nation.

"You know, in this election, their integrity was match by the strength, independence and the integrity of our judicial system."

Biden noted that the Trump campaign brought "dozens and dozens" of legal challenges, but the courts, including the Supreme Court, dismissed all of them.

"In America, when questions are raised about the legitimacy or an election, those questions are resolved through legal processes. That is what happened here," Biden said. "In every case, no cause or evidence was found to reverse or question or dispute the results."

Biden's speech, an attempt to bolster his legitimacy as the next president, was delivered after the Electoral College certified 306 votes for him -- the same number that Trump received in 2016. Biden noted that Trump in 2016 called his 306 electoral votes "a landslide."

"By his own standards, these numbers represent a clear victory then, and I respectfully suggest they do so now," he said.

Biden's speech was a call for unity, but Trump supporters who believe they were cheated by election officials in some Democrat-run cities and states won't be mollified by Biden's words:

If anyone didn't know before, they know now, what beats deep in the hearts of the American people is this -- democracy, the right to be heard, to have your vote counted, to choose leaders of this nation, to govern ourselves. In America, politicians don't take power. People grant power to them.

The flame of democracy was lit in this nation a long time ago. We now know nothing -- not even a pandemic or an abuse of power can extinguish that flame. And as the people kept it aflame, so too did courageous state and local officials and election workers.

American democracy works because America makes it work at a local level. One of the extraordinary things we saw this year was that everyday Americans -- our friends and our neighbors, often volunteers -- Democrats, Republicans Independents, demonstrating absolute courage.

They showed a deep and unwavering faith in and a commitment to the law. They did their duty in the face of a pandemic. And then they could not and would not give credence to what they knew was not true.

They knew this election was overseen. It was overseen by them. It was honest, it was free and it was fair. They saw it with their own eyes, and they wouldn't be bullied into saying anything different.

It was truly remarkable, because so many of these patriotic Americans were subject to so much enormous political pressure, verbal abuse, and even threats of physical violence. But we all wish that our fellow Americans in these positions will always show such courage and commitment to free and fair elections.

At the end of his speech, Biden called for unity and healing: "In this battle for the soul of America, democracy prevailed," he said. "We the people voted. Faith in our institutions held. The integrity of our elections remains intact. Now it is time to turn the page, to unite, to heal."

Biden repeated that he will be president "for all Americans," many of whom remain bitter about the expansion of ripe-for-fraud mail-in voting; affidavits alleging vote fraud; changes in voting laws made not by state legislatures but by election officials; and vote tallying that was shielded from view -- or conducted in the absence -- of election observers.