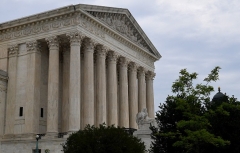 The US Supreme Court issued the final rulings of the current term on July 1, 2021. (Photo by OLIVIER DOULIERY/AFP via Getty Images)

(CNSNews.com) - The U.S. Supreme Court on Thursday upheld an Arizona law requiring voters to cast their ballots in the precinct to which they are assigned; and the court also upheld a state law that bars ballot harvesting.

The U.S. Supreme Court ruled 6-3 that Arizona’s out-of-precinct policy and its ballot harvesting ban do not violate Section 2 of the Voting Rights Act. Moreover, the court said the ballot-collection restriction was not enacted with a racially discriminatory purpose.

The ruling is a defeat for the Democrat National Committee and affiliates, which alleged that Arizona's refusal to count ballots cast in the wrong precinct and its ballot-collection restriction had an adverse and disparate effect on the state’s American Indian, Hispanic, and African-American citizens in violation of Section 2 of the Voting Rights Act.

The opinion may also serve as a guideline for recent federal efforts to invalidate voting laws passed by Republican-led states.

Arizona Attorney General Mark Brnovich said today's Supreme Court ruling is "a win for election integrity safeguards in Arizona and across the country. Fair elections are the cornerstone of our republic, and they start with rational laws that protect both the right to vote and the accuracy of the results."

All voters may vote by mail or in person for nearly a month before election day, but Arizona imposes two restrictions that are claimed to be unlawful. First, in some counties, voters who choose to cast a ballot in person on election day must vote in their own precincts or else their ballots will not be counted. Second, mail-in ballots cannot be collected by anyone other than an election official, a mail carrier, or a voter’s family member, household member, or caregiver.

The Court mentions several important circumstances to consider regarding the precinct policy, as follows:

-- "The racial disparity in burdens allegedly caused by the out-of-precinct policy is small in absolute terms. A policy that appears to work for 98% or more of voters to whom it applies—minority and non-minority alike—is unlikely to render a system unequally open."

-- "Precinct-based voting furthers important state interests. It helps to distribute voters more evenly among polling places and thus reduces wait times. It can put polling places closer to voter residences than would a more centralized voting center model. In addition, precinct-based voting helps to ensure that each voter receives a ballot that lists only the candidates and public questions on which he or she can vote, and this orderly administration tends to decrease voter confusion and increase voter confidence in elections."

No evidence of disparate impact

The court notes the following (verbatim):

-- Arizonans who receive early ballots can submit them by going to a mailbox, a post office, an early ballot drop box, or an authorized election official’s office within the 27-day early voting period. They can also drop off their ballots at any polling place or voting center on election day, and in order to do so, they can skip the line of voters waiting to vote in person. Making any of these trips -- much like traveling to an assigned polling place -- falls squarely within the heartland of the “usual burdens of voting.”  And voters can also ask a statutorily authorized proxy -- a family member, a household member, or a caregiver -- to mail a ballot or drop it off at any time within 27 days of an election.

-- Arizona also makes special provision for certain groups of voters who are unable to use the early voting system. Every county must establish a special election board to serve voters who are “confined as the result of a continuing illness or physical disability,” are unable to go to the polls on election day, and do not wish to cast an early vote by mail. At the request of a voter in this group, the board will deliver a ballot in person and return it on the voter’s behalf.

-- Arizona law also requires employers to give employees time off to vote when they are otherwise scheduled to work certain shifts on election day.

-- The plaintiffs were unable to provide statistical evidence showing that HB 2023 had a disparate impact on minority voters. Instead, they called witnesses who testified that third-party ballot collection tends to be used most heavily in disadvantaged communities and that minorities in Arizona -- especially Native Americans -- are disproportionately disadvantaged.  But from that evidence, [a lower court] could conclude only that prior to HB 2023’s enactment, “minorities generically were more likely than non-minorities to return their early ballots with the assistance of third parties.” How much more, the court could not say from the record. Neither can we. And without more concrete evidence, we cannot conclude that HB 2023 results in less opportunity to participate in the political process.

-- Even if the plaintiffs had shown a disparate burden caused by HB 2023, the State’s justifications would suffice to avoid Section 2 liability. ...Limiting the classes of persons who may handle early ballots to those less likely to have ulterior motives deters potential fraud and improves voter confidence. That was the view of the bipartisan Commission on Federal Election Reform chaired by former President Jimmy Carter and former Secretary of State James Baker. The Carter-Baker Commission noted that “[a]bsentee balloting is vulnerable to abuse in several ways: . . . Citizens who vote at home, at nursing homes, at the workplace, or in church are more susceptible to pressure, overt and subtle, or to intimidation.”