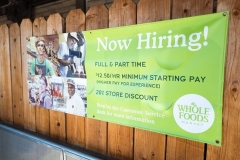 A sign of the times in Lafayette, California. (Photo via Smith Collection/Gado/Getty Images)

A record 158,510,000 Americans are now working, the 23rd such record since President Donald Trump took office.

The nation’s labor force participation rate also set a Trump-era high of 63.3 percent. This number is explained in greater detail below, but the higher, the better. Payroll taxes from people who work help support programs for those who don't.

The economy added 128,000 jobs in October, higher than economists expected, given the General Motors strike that began on Sept. 15 and lasted six weeks.

The unemployment rate, which set a 50 year low of 3.5 percent last month, ticked up a tenth of a point to 3.6 percent.

But the unemployment rate for black Americans, 5.4 percent in October, has never been this low.

In October, the civilian non-institutional population in the United States was 259,845,000. That included all people 16 and older who did not live in an institution (such as a prison, nursing home or long-term care hospital).

Of that civilian non-institutional population, 164,364,000 were participating in the labor force, meaning that they either had a job or were actively seeking one during the last month. This resulted in a labor force participation rate of 63.3 percent.

The labor force participation rate has never been higher than 67.3 percent, a level achieved in the early months of 2000. The Trump-era high, until today, was 63.2 percent, and economists say retiring baby boomers account for some of the decline since the turn of the century.

The number of Americans not in the labor force, but who want a job, totaled 4,880,000 in October, which is an eleven-year low.

--The business and economic reporting of CNSNews.com is funded in part with a gift made in the memory of Dr. Keith C. Wold.