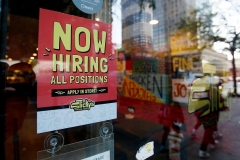 (CNSNews.com) - Reversing recent declines, the percentage of the population that is either working or actively looking for work increased slightly to 62.3 percent in December, up one-tenth of a point from November, and four basis points higher than the 61.9 percent in December 2021.

People who are not in the labor force have no job and are not looking for one. This group includes retirees, students, caregivers, and others who have dropped out of the labor force at a time when jobs go begging.

Despite higher interest rates, the economy added a strong 230,000 jobs in December, above expectations of 200,000. Notable job gains occurred in leisure and hospitality, health care, construction, and social assistance.

Along with the record number of employed Americans, the number of unemployed -- no job but actively looking -- dropped by 278,000 to 5,722,000 last month, producing an unemployment rate of 3.5 percent, one-tenth of a point lower than it was in November.

The unemployment rate has remained in the 3.5-3.7 percent range since March.

In December, the civilian non-institutional population in the United States was 264,844,000. That included all people 16 and older who did not live in an institution, such as a prison, nursing home or long-term care facility.

Of that civilian non-institutional population, 164,966,000 were participating in the labor force, meaning they were either employed or unemployed -- they either had a job or were actively looking for one during the last month. This resulted in a labor force participation rate of 62.3 percent in December -- up from 62.2 (revised) in November; 62.2 percent in October; and the same as it was in September (62.3 percent).

The participation rate was 61.4 percent when Joe Biden took office as the pandemic raged. Today's number, 62.3 percent, is still more than a point below the Trump-era high of 63.4 percent recorded in February 2020, just before COVID-prompted shutdowns.

Among the major worker groups, the unemployment rate for Whites fell to 3.0 percent in December. The jobless rates for adult men (3.1 percent), adult women (3.2 percent), teenagers (10.4 percent), Blacks (5.7 percent), Asians (2.4 percent), and Hispanics (4.1 percent) showed little or no change over the month.

In a speech on November 30, Federal Reserve Chair Jerome Powell noted that "demand for workers far exceeds the supply of available workers," which has pushed up wages (and inflation).

"Looking back, we can see that a significant and persistent labor supply shortfall opened up during the pandemic -- a shortfall that appears unlikely to fully close anytime soon.

Powell said labor force participation "dropped sharply at the onset of the pandemic because of many factors, including sickness, caregiving, and fear of infection. Many forecasters expected that participation would move back up fairly quickly as the pandemic faded. And for workers in their prime working years, it mostly has. Overall participation, however, remains well below pre-pandemic trends."

Powell pointed to recent research by Fed economists showing that labor force participation is being constrained by what he called "excess retirements," or "retirements in excess of what would have been expected from population-aging alone.”

"These excess retirements might now account for more than 2 million of the 31/2 million shortfall in the labor force."

Powell said excess retirements can be explained by health issues, the cost of finding new employment, particularly for older workers; and a rising stock market and home prices in the first two years of the pandemic, which "contributed to an increase in wealth that likely facilitated early retirement for some people."

Powell said older workers are still retiring at higher rates, and retirees aren't returning to the labor force in large enough numbers to reduce the number of excess retirees.

He said a second factor contributing to the labor supply shortfall is "slower growth in the working-age population."

The Fed's goal is to restore balance to labor supply and labor demand. Its recent interest rate increases are an attempt to slow job creation.