137,242,000: Number of Employed Americans Increases; Unemployed Down; Improvements All Around 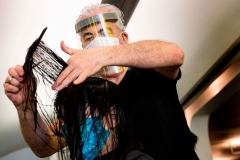 Many more Americans are returning to work as the economy reopens. (Photo by JIM WATSON/AFP via Getty Images)

(CNSNews.com) - The jobs/employment report issued today by the Labor Department reflects what was happening in mid-May, and while it remains a grim picture, there are signs of improvement in every category as Americans straggle back to work.

The number of Americans counted as not in the labor force, meaning they did not have a job and were not looking for one, also dropped by 1,583,000 from April's record high, settling at 101,820,000 in May, which is still a huge increase from earlier levels, but again, a move in the right direction.

In May, the civilian non-institutional population in the United States was 260,047,000. That included all people 16 and older who did not live in an institution (such as a prison, nursing home or long-term care facility).

Of that civilian non-institutional population, 158,227,000 were participating in the labor force, meaning they either had a job or were actively seeking one during the last month. This resulted in a labor force participation rate of 60.8 percent, up from 60.2 percent in April, but below the Trump-era high of 63.4 percent set this past January and February.

The participation rate was 62.8 percent when Trump took office, and it had showed little change, until now, as retiring baby boomers offset additions to the nation's workforce.

In another plus, the economy added 2.5 million jobs in May.

President Trump was quick to tweet about the improving situation:

More tweets followed, leading up to a 10 a.m. presidential news conference, where Trump will tout the improving numbers:

-- Congratulations to wonderful Charles Payne on having been so optimistic, and therefore correct. Market up BIG!!!

-- Oh no, the Dems are worried again. The only one that can kill this comeback is Sleepy Joe Biden!

-- It’s a stupendous number. It’s joyous, let’s call it like it is. The Market was right. It’s stunning! @jimcramer

-- It is a stunner by any stretch of the imagination! @CNBC

Since mid-May, many more Americans have returned to work.

The number of people filing for claims (unemployment benefits) has declined steadily over the last few weeks, and the continuing claims dropped significantly, by about 3.3 million over the last couple of weeks. So, those are some good signs.

I've been of the view, Stuart, many of these jobs will come back quickly because they were still there. It was that, because of public health measures, we were keeping businesses from opening, workers returning, but they're going back now.

So, we've seen some bad numbers, a lot of hardship, but we're now reopening and I think importantly we're reopening safely, too.

Scalia said he thinks the nation's unemployment rate will drop below 10 percent by the end of the year.

"I really do believe that, as hard as this has been for American workers and their families, it was always meant to be temporary. We had an extraordinarily strong economy. By the way, I think policies the president set of lower taxes to incentivize growth, of avoiding the necessarily regulatory burdens is going to be even more important.

“So, I think we can move these numbers quickly. Even though there's going to be some jobs that definitely take longer to come back."

Scalia noted that Friday's jobs report will reflect what was happening in the middle of May: "Things have changed a lot since then."

However, there was also a large number of workers who were classified as employed but absent from work. As was the case in March and April, household survey interviewers were instructed to classify employed persons absent from work due to coronavirus-related business closures as unemployed on temporary layoff. However, it is apparent that not all such workers were so classified.

BLS and the Census Bureau said they are investigating why this misclassification error continues to occur and are taking additional steps to address the issue.

According to BLS, if the workers who were recorded as employed but absent from work due to "other reasons" (over and above the number absent for other reasons in a typical May) had been classified as "unemployed, on temporary layoff," the overall unemployment rate would have been about 3 percentage points higher than the reported 13.0 percent (on a not seasonally adjusted basis).

However, according to usual practice, the data from the household survey are accepted as recorded. To maintain data integrity, no ad hoc actions are taken to reclassify survey responses.