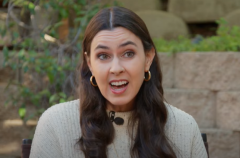 A digital library service apparently excluded from its database screenshots of the Twitter account of Washington Post columnist Taylor Lorenz, after Lorenz doxxed the identity and location of an individual who poked fun at leftists on Twitter.

When users attempted on Tuesday to view screenshots of Lorenz's Twitter account as it appeared on past days and at past times using the Internet Archive's Wayback Machine, the website returned the message "Sorry. This URL has been excluded from the Wayback Machine."

This exclusion prevents journalists and others from viewing tweets that Lorenz may have deleted.

Taylor Lorenz's Twitter feed has been "excluded" from the Internet Archive Wayback Machine.

Internet Archive's stated mission is to "provide universal access to all knowledge." pic.twitter.com/j9CI9aqymt

Internet Archive's stated mission is to "provide universal access to all knowledge." Its site states that users "can send an email request for us to review to info@archive.org with the URL (web address) in the text of your message" in order to obtain an exclusion from the website, but does not stipulate on what basis exclusions are granted.

The Post's Taylor Lorenz did not respond to a request for comment regarding whether she requested the exclusion.

The company's apparent exclusion of Lorenz from its database comes after the Washington Post columnist published the name and residential area of the person operating an account called Libs of TikTok in, as critics have described it, an attempt to intimidate the individual from continuing to upload content.

Libs of TikTok shares videos depicting leftists, such as Allyn Walker, who had served as a professor at Old Dominion University until Libs of TikTok posted a video in which Walker attempted to destigmatize pedophiles by calling them "minor-attracted persons." Walker subsequently resigned from his position at ODU.

This is an example of an educator who lost their job after I posted their own video. A professor who wants to destigmatize pedophelia. This is who the left is defending. https://t.co/3UXezrGwvp

While users cannot view archived screenshots of Lorenz's Twitter account via the Internet Archive, alternative digital library service archive.ph shows that, as of Nov. 10, 2020, Lorenz had made over 16,800 tweets. However, her current Twitter profile contains under 3,500 tweets, suggesting she has previously deleted numerous tweets.

CNSNews reached out to Internet Archive for comment on why it apparently removed Lorenz from its database, as well as when exactly it made the decision, and for how long screenshots of Lorenz's Twitter will remain inaccessible. As this story was posted, Internet Archive had not responded.