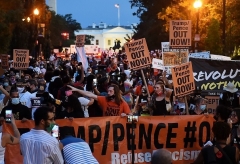 Demonstrators protest at Black Lives Matter Plaza across from the White House in August. (Photo by Olivier Douliery/AFP via Getty Images)

(CNSNews.com) – Girding up for a big week ahead, the leftist direct-action group calling itself Shutdown DC plans to hold an election result-watching gathering on the evening of Election Day at Black Lives Matter Plaza across from the White House – “a good place to respond to whatever might happen.”

On Wednesday morning, according to its website, the group is inviting people to gather at BLM Plaza and Union Station, from where “we’ll step off to disrupt business as usual for some of the institutions that are most complicit in [President] Trump’s attack on Democracy.”

“Trump will only be able to successfully launch a coup if his donors, the media and the Republican Party establishment goes along with his attack on democracy,” Shutdown DC says. “We’re going to put Trump’s enablers on notice: We hold you accountable for facilitating Trump’s historic attacks on democracy.”

And on Friday, “we’re going to be ready to continue the uprising to defend democracy by shutting down business as usual in the nation’s capital. We’ll be continuing our planning and organizing over the next week and we’ll be ready to do whatever it takes to stop a coup!”

Expect to hear that word – “coup” – frequently from such quarters in the coming days.

A leaked organizing call via Zoom in which activists discussed their plans featured organizer Patrick Young talking about preparations for responding “to different contested election scenarios.”

First of all, he says, “we think that we need to start the post-election phase in the streets.”

A big march is being planned for Saturday by “all the mainstream groups,” before the focus moves onto lawmakers returning for the lame-duck session.

“The following week Congress is planning on coming to town, and passing laws again, and, like, having business as usual,” Young says. “And we’re saying there’s – if, if we’re in a coup, there’s no time for business as usual. Members of the Congress that are coming in, we’re going to meet them at the airports or at Union Station, and send them back to where they came from, until we deal with the situation we’re in.”

If enough lawmakers do manage to get into D.C. and “we need to go to Capitol Hill that week,” he says, “well, you know, we’ll do that too.”

‘We are going to be in a crisis, but we want it to be one that we are creating’

“So we’re talking about, what would it take to surround the White House, and have people do stuff?” she asks. “We can divide it up easily into affinity groups. We have to be willing to put our bodies on the line and take on some discomfort, sacrifice, risk, in order to change things.”

Fithian says there may be a scenario where protestors are facing people who are armed.

“I think we don’t have a lot of experience taking over government buildings,” she says. “We might need to think about that.”

“We may find ourselves on the streets with people with different tactics than ours. Like, there may be some people who are willing to break the windows to get into the government buildings. Like, it that’s what we need to do then we shouldn’t fight about that. Let’s do that – let’s take over the buildings.”

“A coalition of the worst far-left, neo-Marxist groups in Washington, called Shutdown DC, is promising attacks on conservative organizations and their leaders in the Washington, D.C., area,” with CWF among the organizations targeted, he told supporters.

“Just so there is no confusion, they literally provided leftist stormtroopers with a convenient map with the addresses of groups and people they want taken down.”

The tweet prompted a response from Rep. Dan Crenshaw (R-Texas): “Trump’s chaos? Last I checked, businesses weren’t boarding up their windows because they were afraid of Trump supporters.”