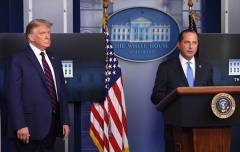 (CNSNews.com) – The Food and Drug Administration on Sunday issued an “emergency use authorization” for transfusions into COVID-19 patients of plasma donated by those who have recovered from the disease, citing data showing a significant – up to 35 percent in some cases – reduction in mortality rates.

Americans who have recovered from the disease caused by the coronavirus that emerged in Wuhan late last year are being urged to donate plasma, the liquid component of blood, for injection into COVID-19 patients.

Speaking at the White House, President Trump, FDA Commissioner Stephen Hahn, and Health and Human Services Secretary Alex Azar, all voiced optimism about the “convalescent plasma” treatment, as America and the world continues to confront the deadly respiratory disease.

“This is a powerful therapy that transfuses very, very strong antibodies from the blood of recovered patients to help treat patients battling a current infection,” the president said. “Today’s action will dramatically expand access to this treatment.”

The government had provided $48 million dollars to fund a Mayo Clinic study testing the efficacy of convalescent plasma, he said.  The FDA, MIT, Harvard, and Mount Sinai Hospital had also found the treatment to be “a very effective method of fighting this horrible disease,” he added.

“Based on the science and the data, the FDA has made the independent determination that the treatment is safe and very effective,” Trump said.

Azar said work on evaluating the treatment had begun in early April.

“The data we gathered suggests that patients who were treated early in their disease course – within three days of being diagnosed – with plasma containing high levels of antibodies, benefited the most from treatment,” said Azar.

“We saw about a 35 percent better survival in the patients who benefited most from the treatment, which were patients under 80, who were not on artificial respiration.”

Azar said that number should not be glossed over.

“We dream in drug development of something like a 35 percent mortality reduction,” he said. “This is a major advance in the treatment of patients. It’s a major advance.”

Hahn said that the “convalescent plasma” of donors recovering from an infection has been used to treat others with the same disease for more than 100 years.

Under the evaluation launched in April, almost 100,000 Americans had enrolled to receive the treatment, and 70,000 had already received it, in “one of the largest expanded access programs in the history of FDA.”

“In the independent judgement of experts and expert scientists at FDA, who have reviewed the totality of data – not just the data from this expanded access program, but from more than a dozen published studies, as well as the historical experience associated with this – those scientists have concluded that COVID-19 convalescent plasma is safe, and shows promising efficacy, thereby meeting the criteria for emergency use authorization,” he said.

Hahn, a cancer doctor before assuming the FDA leadership post, said that “a 35 percent improvement in survival is a pretty substantial clinical benefit.”

He said data would continue to be collected moving forward.

Recovered COVID-19 patients are being urged to go to the website coronavirus.gov to sign up to donate plasma.

At that site, Azar said, they could “find out a quick, convenient way to play a potentially life-saving role in our fight.”

“Know, if you donate plasma, you could save a life,” he said.

Some health experts have raised concerns that allowing the emergency use of convalescent plasma in COVID-19 patients may have a negative impact on ongoing randomized and placebo-control studies of the treatment, since patients would likely prefer to have the treatment now rather than take part in trials.

Last week the New York Times reported that National Institutes of Health director Francis Collins and National Institute of Allergy and Infectious Diseases director Tony Fauci were pushing back against the pending EUA decision by the FDA, expressing concern that that data on the treatment were weak. It said the authorization was on hold as a result.

Asked Sunday whether there had been a holdup on FDA approval, and if so whether the holdup had been “political in nature,” Trump replied, “I think that there might have been a holdup, but we broke the logjam over the last week, to be honest.”

“I think that there were people in the FDA and actually in your larger department” – he direct the comment at Azar – :that can see things being held up, and wouldn’t mind so much. It’s my opinion, very strong opinion, and that’s for political reasons.”

“This has nothing to do with politics,” he said of the EUA announcement. “This has to do with life and death.”