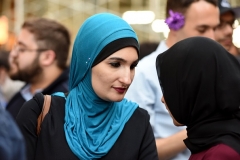 Coming amid the choreographed show of unity at the party’s virtual convention, the incident recalls the row that upset the Democratic caucus shortly after Rep. Ilhan Omar (D-Minn.) entered Congress and made provocative remarks, prompting damage-control efforts by party leaders.

Sarsour was a surrogate for Sen. Bernie Sanders during his presidential campaign. She is also seen as an ally of progressive “Squad” members Omar, Alexandria Ocasio-Cortez (D-N.Y.), and Rashida Tlaib (D-Mich.), all of whom also supported Sanders’ campaign.

Sarsour’s appearance on a livestream event for the DNC’s Muslim Delegates and Allies Assembly on Tuesday drew attention, given her outspoken support for the anti-Israel boycott, divestment and sanction (BDS) movement and earlier controversies over associations with Nation of Islam leader Louis Farrakhan.

The Republican National Committee posted a short clip of her appearance, and Republican Jewish Coalition executive director Matt Brooks said, “If Linda Sarsour is the face of the Democrat Party, then the Democrat Party has truly become the party of anti-Semitism and too toxic for American Jews.”

The kerfuffle took a new turn when Biden campaign spokesman Andrew Bates, as quoted by CNN’s Jake Tapper, said of Sarsour, “Joe Biden has been a strong supporter of Israel and a vehement opponent of anti-Semitism his entire life, and he obviously condemns her views and opposes BDS, as does the Democratic platform.”

“She has no role in the Biden campaign whatsoever.”

That sparked a firestorm of criticism from Sarsour allies, with the Council on American-Islamic Relations (CAIR) demanding an apology from Biden and the Arab American Institute (AAI) calling for a “correction.”

“We do not stand for these attempts to repress advocacy for Palestinian rights from the right, and we will not stand for it from the Biden campaign,” he said.

Awad advised Biden to “pick a side” in what he called the “global and domestic divide between those who believe in freedom and dignity for all – no exceptions – and those who justify oppression and supremacy.”

He called on Biden to “immediately apologize to Linda Sarsour and to American Muslims.”

‘One of the best organizers in this country’

“It is disappointing to see a staffer of the Biden Campaign fall victim to the hateful tactic of Arab baiting,” she said. “We know all too well this reprehensible strategy to silence voices for Palestinian justice.”

“One can disagree with Linda’s support of BDS,” Berry said. “And a campaign can issue any statement it wants proclaiming its support for the state of Israel. But one cannot conflate advocacy for Palestine with the very real threat of anti-Semitism.”

For her own part, Sarsour sounded a characteristically defiant note.

As the Biden campaign spokesman noted, the Democratic 2020 platform opposes the BDS movement.

“We oppose any effort to unfairly single out and delegitimize Israel, including at the United Nations or through the Boycott, Divestment, and Sanctions Movement, while protecting the Constitutional right of our citizens to free speech,” it says.

The platform voices “ironclad” support for “a strong, secure, and democratic Israel” including its “right to defend itself.”

It backs the two-state solution to the conflict, and opposes “any unilateral steps by either side – including annexation – that undermine prospects for two states. Democrats will continue to stand against incitement and terror.”

The platform also opposes expansion of settlements on disputed territories and pledges to “restore U.S.-Palestinian diplomatic ties and critical assistance to the Palestinian people.”

The platform stance on boycotting Israel puts it at odds with progressives like Tlaib and Omar, both of whom have publicly endorsed the BDS movement.

In July last year Tlaib, Omar and Ocasio-Cortez all voted against an anti-BDS measure that passed with a large bipartisan majority.

Women’s March Founder Asks Leaders to Step Down for Refusing to Distance Themselves from Groups Espousing Hateful Beliefs (Nov. 20, 2018)