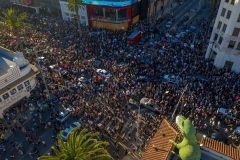 Tens of thousands protest in the Hollywood section of Los Angeles on June 7. (Photo by David McNew/Getty Images)

(CNSNews.com) – As Jews around the world prepare to mark Rosh Hashanah on Friday, an Orthodox rabbi in California plans to meet with another family in his congregation “in accordance with millennia-old tradition,” in defiance of a Los Angeles County coronavirus restriction that bars Jews from observing the High Holidays with other families inside private homes.

Attorneys representing Rabbi Yisrael Gelb have written to county officials, urging them to reverse a policy which they argue is discriminatory and unlawful.

“The county should immediately make it clear to the public that it will not dispatch Los Angeles County Sheriff’s deputies to the homes of Jewish families gathered for religious meals during the High Holidays inside someone’s home,” wrote Stephanie Taub, senior counsel at First Liberty Institute.

The same document that says “individual and family gatherings or parties of any size aren’t allowed” and lists among prohibited activities “having a meal with extended family and friends for a religious or cultural holiday,” allows barbers and hair salons to offer indoor services at 25 percent of the premises’ maximum occupancy.

Also permitted are outdoor protest demonstrations of any size, as long as participants wear face coverings.

Alluding to the latter, Taub wrote, “Los Angeles county appears to favor First Amendment guarantees when applied to hundreds of thousands of its citizens marching in close proximity, singing, chanting, and looting, but would single out a small Jewish family peacefully sharing a meal with friends or extended family inside their own home.”

Last June, tens of thousands of protestors – 100,000 according to Black Lives Matter estimates -- took part in a BLM protest in Hollywood, with little evidence of social distancing. 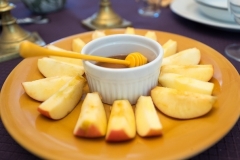 Festive meals are traditional on Rosh Hashanah, the Jewish new year, which begins at sundown on Friday, ushering in the High Holidays incorporating Yom Kippur, the holiest day on the Jewish calendar, on Sept. 27-28. They are followed days later by Sukkot (the Feast of Tabernacles) and Simchat Torah.

“I plan on honoring the High Holidays as I do every year, by sharing a table with a local family in my congregation,” he said. “We urge the county to reverse its policy and allow us to celebrate our most holy days in peace and safety.”

In her letter, Taub noted that the county in recent days made a small alteration to the wording in its document regarding prohibited activities. Initially the list included “having dinner with extended family and friends to honor the High Holidays (Rosh Hashanah, Yom Kippur).”

This week that was changed to, “having a meal with extended family and friends for a religious or cultural holiday.”

“Although now hiding behind obscured language, the ban on celebrating the High Holidays with others remains,” she wrote.

“In light of the county’s tolerance of mass political gatherings of up to 100,000 individuals, as well as its express approval of various commercial activity, the county has waived any argument that it must prohibit small gatherings for the most holy days of the Jewish calendar.”

Taub pointed out that violations of local health orders are punishable by fines or imprisonment.

Approached for comment on Thursday, the county’s public health department emailed essentially the same statement it issued when a court earlier this month upheld its complaint against an evangelical congregation’s decision to hold indoor services in defiance of regulations.

It said in part, “We recognize that religious services are central to many of our residents’ lives, especially in these trying times, and religious services have been allowed to be held online and outdoors with physical distancing and the use of face coverings, and they may continue to be held with those public health safeguards in place.”

First Liberty points out that for Orthodox Jews, virtual gatherings on holy days is not an option, since over Shabbat – Friday sunset through Saturday sunset – they do not use electricity.

“Suggestions that such meals occur out of doors are likewise unavailing,” Taub wrote. “Record heat, pervasive smoke and ash from wildfires, and civil unrest targeting those dining outside present new threats to the physical health and safety of Jewish families throughout Los Angeles.”