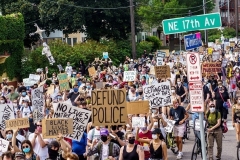 Demonstrators in Minneapolis on Saturday protest against police brutality and the Minneapolis Police Department. (Photo by Kerem Yucel/AFP via Getty Images)

(CNSNews.com) – A day after Rep. Ilhan Omar (D-Minn.) called the Minneapolis Police Department “rotten to the root” and compared it to a cancer needing to be cut out, nine members of the Minneapolis City Council publicly announced their intention to dismantle the 153-year-old department.

The pledge, a response to the May 25 death of George Floyd at the hands of a white MPD officer, came during an open-air public meeting Sunday addressed by the Minneapolis City Council’s president Lisa Bender and other council members.

The council comprises 13 members (one of the 13 seats is currently vacant), so the nine in favor of shutting down the MPD would evidently constitute a veto-proof majority.

“This is dangerous, counterproductive, and deeply irrational,” tweeted Rep. Dan Crenshaw (R-Texas), in reaction to the news. “‘Defund the police’ is not a call from the fringes of the far left anymore. It has gone from a radical slogan to actual policy in a major American city, within days.”

On Friday, Omar posted a tweet calling for the police department serving the district she represents in the House to be shut down.

“The Minneapolis Police Department has proven themselves beyond reform,” she said. “It’s time to disband them and reimagine public safety in Minneapolis.”

Omar took that message to a protest rally in the city on Saturday, drawing cheers when she did so.

“The Minneapolis Police Department is rotten to the root and so when we dismantle it, we get rid of that cancer and we allow for something beautiful to rise,” she said. “And that reimagining allows us to figure out what public safety looks like for us.”

Minneapolis Mayor Jacob Frey was booed by protestors Saturday when he said he does not support dismantling the police department.

Sunday’s event at Powderhorn Park, entitled “The Path Forward,” was hosted by two Minnesota activist groups, Black Visions Collective and Reclaim the Block. In front of the platform, in large white letters, were the words DEFUND POLICE.

“Black people and queer people and trans people and indigenous people and disabled people and immigrants and poor people, we have never looked to the police for our safety,” Black Visions Collective director Kandace Montgomery told the meeting. “We have looked to each other for protection from the police.” 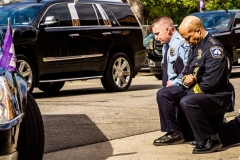 Minneapolis Police Chief Medaria Arradondo, right, kneels as the remains of George Floyd are taken to a memorial service in Minneapolis on Thursday. (Photo by Kerem Yucel/AFP via Getty Images)

The nine Minneapolis City Council members who pledged to shut down the MPD were Bender, her vice president Andrea Jenkins, Philippe Cunningham, Cam Gordon, Steve Fletcher, Jeremiah Ellison, Alondra Cano, Jeremy Schroeder, and Andrew Johnson. All are members of the Democratic-Farmer-Labor party except Gordon, a member of the Green Party of Minnesota.

“We are here today to begin the process of ending the Minneapolis Police Department, and creating a new transformative model for cultivating safety in Minneapolis,” stated the pledge, which council members took turns reading out in segments.

“We recognize that we don’t have all the answers to what a police-free future looks like, but we know that the community does.”

Bender told the gathering, “We are here because in Minneapolis and cities across the United States it is clear that our system of policing is not keeping our communities safe. Our efforts at incremental reform have failed. Period.”

“Our commitment is to do what is necessary to keep every single member of our community safe – and to tell the truth, that the Minneapolis police are not doing that,” Bender said. “Our commitment is to end our city’s toxic relationship with the Minneapolis Police Department, to end policing as we know it, and to recreate systems of public safety that actually keep us safe.”

After inviting every Minneapolis resident “into a conversation about how we move forward together,” Bender handed the platform to the Minneapolis City Council vice president, Andrea Jenkins, who read a poem about “why we wear the color purple.”

“We wear purple because radical-women-of-color feminism shapes our mindset and thought processes, offering critical resistance to the prison-industrial complex, male patriarchy, and religious subjugation,” declared Jenkins, who in 2017 became the first openly transgender black person to be elected to public office in the United States.