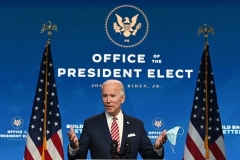 Joe Biden gestures with a face mask as he briefs press in Wilmington, Delaware on Nov. 16, 2020. (Photo by Roberto Schmidt/AFP via Getty Images)

(CNSNews.com) – Fox News anchor Chris Wallace took issue with Health and Human Services Secretary Alex Azar during an interview Sunday for referring to “Vice President Joe Biden,” making the point three times that he should use the term “president-elect.”

Wallace also took the opportunity to criticize President Trump for an early lack of enthusiasm about mask wearing.

“If President Trump had worn a mask then and urged everyone to wear a mask then, back in April, the way Joe Biden is right now, wouldn’t we be in much better shape?” he asked.

The World Health Organization (WHO) itself advised against mass mask wearing until June.

The kerfuffle over terminology came when Azar referred, in response to that question on masks, to “Vice President Biden.”

Azar continued to answer the question put to him, saying that Trump has called mask wearing “patriotic,” and that “every one of his top advisors, we are out there saying ‘wear your mask.’”

Azar went on explain some of the medical reasoning for doing so, and when he finished, Wallace chided him – now for the third time – for his use of language.

“First of all, it’s the President-elect Joe Biden, Secretary Azar, and secondly, the fact is the president said on the first day, April 3, he wasn’t going to wear a mask. He didn’t wear a mask in public for three months.”

Biden is the projected president-elect until the U.S. Congress on January 6 formally counts the electoral votes cast by the electoral college on the Monday after the second Wednesday in December – Dec. 14 in 2020.

The term “president-elect” has traditionally been used, informally, much earlier in the process. Trump changed his Twitter bio to “president elect” on November 9, 2016 – a day after the election – after media projected his electoral college victory.

Biden changed the beginning portion of his Twitter bio from “Senator, Vice President, 2020 candidate for President of the United States” to “President-elect” on November 7, on the day when CNN, followed by other outlets, projected that he would win Pennsylvania, and with it the presidency. Compared to the significant legal disputes in 2020, there were relatively minor disputes and recall counts in 2016.

Biden said in a CNN interview on Thursday that he would ask Americans to wear masks for the first 100 days of his presidency in a bid to curtail the spread of the coronavirus.

Wallace contrasted that stance with Trump’s comments on April 3.

When Trump announced the new recommendation, he said it was “voluntary” and added that he himself will not wear a mask. (He added later in the briefing, “Maybe I’ll change my mind, but this will pass and hopefully it’ll pass very quickly.”)

Trump was seen wearing a mask in public for the first time on July 11, when visiting Walter Reed Medical Center.  Biden appeared in public on Memorial Day, May 25, wearing a mask.

(The two clips aired by Wallace gave the misleading impression that CDC Director Robert Redfield had announced the new mask wearing advice on April 3, with Trump then reacting to it. In fact, it was Trump who made the announcement, at a briefing of the White House coronavirus taskforce. The comment from Redfield in the clip played by Wallace, came an hour and two minutes later.)

President Trump removes his mask before speaking at the White House in October. (Photo by Mandel Ngan/AFP via Getty Images)

While critics stress the need to “follow the science” on mask wearing, the WHO itself advised against the general practice until June, arguing that it would encourage a false sense of security and deprive health staff treating COVID-19 patients of badly needed personal protective equipment.

Medical advice around the world on dealing with the novel coronavirus was evolving over time, as experts learned more about how the respiratory pathogen spread. Trump and his supporters are frequently accused of politicizing mask wearing; in fairness, people on both sides have done so.

“There is no specific evidence to suggest that the wearing of masks by the mass population has any potential benefit,” WHO emergency program director Dr. Michael Ryan said just four days before Trump announced the recommendation on April 3. “In fact, there’s some evidence to suggest the opposite in the misuse of wearing a mask property and fitting it properly,” Ryan added at the time.

Weeks after the April 3 announcement at the White House, WHO experts maintained that stance:

“[T]he wide use of masks by healthy people in the community setting is not supported by current evidence and carries uncertainties and critical risks,” WHO guidance read on April 6.

“If you are healthy, you only need to wear a mask if you are taking care of a person with COVID-19,” WHO guidance stated on May 30.

Only on June 5 did WHO start advising – “in light of evolving evidence” – that people should be encouraged to wear masks “where there is widespread transmission and physical distancing is difficult, such as on public transport, in shops or in other confined or crowded environments.”

And even then, the global health agency noted, “At the present time, the widespread use of masks by healthy people in the community setting is not yet supported by high quality or direct scientific evidence and there are potential benefits and harms to consider.”