Harris on Oklahoma Abortion Law: ‘Think About That For a Second: From the Moment of Fertilization’ 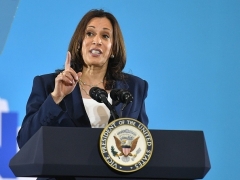 (CNSNews.com) – The White House on Thursday condemned legislation approved by Oklahoma’s state legislature that would ban nearly all abortions, and Vice President Kamala Harris labeled as “outrageous” the fact that it seeks to protect unborn life from the point of fertilization.

“Just half an hour ago, in Oklahoma, the state legislature passed one of the most extreme abortion bans in the country – a ban that would outlaw abortion from the moment of fertilization,” Harris said during a virtual meeting on Thursday afternoon focused on the abortion issue.

“Now, think about that for a second: from the moment of fertilization,” she said. “It’s outrageous, and it’s just the latest in a series of extreme laws around the country.”

The bill, which received its final approval in a 73-16 House vote, prohibits abortion except in a case where the life of the mother is in danger and having an abortion “is necessary to preserve” her life, or if the pregnancy was the result of rape or incest that had been reported to authorities.

The text defines “unborn child” for the purposes of the prohibition on abortion as “a human fetus or embryo in any stage of gestation from fertilization until birth.”

It explicitly does not prohibit use of contraception or emergency contraception, including the so-called “morning-after pill.”

The measure also allows citizens to bring civil lawsuits against individuals who help a woman to procure an abortion – although not against the woman who sought or had the abortion herself.

Oklahoma Gov. Kevin Stitt has pledged to sign into law any pro-life legislation that reaches his desk. In March he signed a Texas-style bill banning abortion after six weeks of pregnancy, when a baby’s heartbeat can be detected.

White House press secretary Karine Jean-Pierre, traveling with President Biden to Asia, issued a statement slamming the Oklahoma vote, calling it “the most extreme effort to undo these fundamental rights we have seen to date.”

“This is part of a growing effort by ultra MAGA officials across the country to roll back the freedoms we should not take for granted in this country,” she said. “They are starting with reproductive rights, but the American people need to know that other fundamental rights, including the right to contraception and marriage equality, are at risk.”

Jean-Pierre was echoing what has become a repeated talking-point for Biden since the leaking of a Supreme Court draft opinion which suggested that the court will overturn the 1973 decision that legalized abortion.

Biden has characterized the potential overturning of Roe v. Wade as just part of a looming broader assault on a number of “rights” and “freedoms” won in past court decisions, including those that legalized same-sex marriage and allowed married couples to buy and use contraceptives without government restriction.

Harris in her remarks covered some of the same ground.

“Overturning Roe opens the door to restricting those rights,” Harris said. “It would be a direct assault on the fundamental right to self-determination, to live and love without interference from the government. At its core, this is about our future as a nation, about whether we live in a country where the government can interfere in personal decisions.”

In the leaked draft opinion, Justice Samuel Alito wrote, “Nothing in this opinion should be understood to cast doubt on precedents that do not concern abortion.”

According to the Guttmacher Institute, 26 states are “certain or likely” to outlaw abortion if Roe v. Wade is overturned or “fundamentally weakened.”