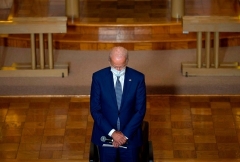 (CNSNews.com) – As American presidents have done for more than three decades, President Joe Biden this week proclaimed the first Thursday in May a “National Day of Prayer,” but unlike his predecessors’ proclamations, his included no reference to God, the Almighty, Providence, or any similar term.

Only in the formal closing paragraph of the proclamation does the formula “in the year of our Lord” – customary in presidential proclamations – appear preceding the year of issue.

In his proclamation issued on Wednesday, Biden cited “a reckoning on racial justice” and “the existential threat of climate change” along with the coronavirus pandemic among the “crises and challenges of our time.”

He also quoted Rep. John Lewis (D-Ga.), the civil rights icon who died aged 80 last July: “Nothing can stop the power of a committed and determined people to make a difference in our society. Why? Because human beings are the most dynamic link to the divine on this planet.”

Previous presidents’ National Day of Prayer proclamations have varied widely in tone and substance, and have frequently included religiously-inclusive language (such as “no matter our faith or beliefs,” “each according to our own faith and tradition,” or “gathering in churches, synagogues, mosques, temples, and homes”).

But at the same time there have been plentiful references to “God,” including such titles as “Creator,” “Maker,” “the Almighty,” and even “our loving Father.”

Some have unapologetically included verses from the Old and New Testaments of the Bible, or such well-known Judeo-Christian phrases as “all things are possible with God” (Trump 2020), “a just and loving God” (Clinton 2000), or “our rock and our salvation” (Bush 1990).

Pronouns referring to God have usually been capitalized, a show of reverence used by some when referring to the deity in the Abrahamic faiths.

In President Trump’s 2020 proclamation, “God” was used ten times, “Almighty God” once, and “the Almighty” once, in some cases in quotes from George Washington and Ronald Reagan. Trump also cited Abraham Lincoln and the Declaration of Independence, and quoted an excerpt of a New Testament verse (1 John 5:14).

Trump in 2019 used “God” four times, “Almighty God” twice, and “our Creator” twice. His 2018 proclamation included “God” three times, as well as “Almighty God” (in a quote from President George W. Bush after the 9/11 terrorist attacks), “Creator” (from the Declaration of Independence), and “our Maker” once each.

Trump’s first National Day of Prayer proclamation in 2017 used “God” four times (once in a Thomas Jefferson quote), and quoted “the great Lord and Ruler of Nations” from Washington’s 1789 Thanksgiving proclamation. It spoke of a coming together “to show gratitude for our many blessings, to give thanks for His providence, and to ask for His continued wisdom, strength, and protection as we chart a course for the future.”

President Obama’s 2016 proclamation referred to “God” twice: “Let us resolve to guide our children and grandchildren to embrace freedom for all, to see God in everyone …”  and “I join all people of faith in asking for God's continued guidance, mercy, and protection as we seek a more just world.”

Obama’s 2015 proclamation mentioned “God” three times and “the Almighty” once.

President George W. Bush in 2008 invoked “God” four times, “the Almighty” once and “our loving Father” once. Bush also quoted from Scripture (Psalm 28:7).

Especially since September 11, millions of Americans have been led to prayer. They have prayed for comfort in a time of grief, for understanding in a time of anger, and for protection in a time of uncertainty. We have all seen God's great faithfulness to our country. America's enemies sought to weaken and destroy us through acts of terror. None of us would ever wish on anyone what happened on September 11th. Yet tragedy and sorrow none of us would choose have brought forth wisdom, courage, and generosity. In the face of terrorist attacks, prayer provided Americans with hope and strength for the journey ahead.

In all, Bush referred to “God” seven times in 2002 and to the “the Almighty” once. He also quoted from the New Testament (Philippians 4:6).

President Clinton’s last National Day of Prayer proclamation in 2000 referred to “God” three times, in one case to “a just and loving God.” He also spoke of Americans coming “before God with humble hearts to ask forgiveness, to seek wisdom, and to offer thanksgiving and praise.”

In his last such proclamation, in 1992, President George H.W. Bush referred to “God,” “Almighty God,” “the Almighty,” cited Benjamin Franklin, Washington, and Lincoln, and quoted the biblical King Solomon (1 Kings 8) and the psalmist David (Psalm 145:13).

And in a particularly lengthy proclamation two years earlier, Bush quoted from the British poet Tennyson (“More things are wrought by prayer than this world dreams of”), touched on stories from the Old and New Testament (Hannah and Samuel, and the parable of the Prodigal Son), cited Jefferson, Franklin, Lincoln, and referenced two Old Testament verses (from Psalm 36 and Psalm 127).