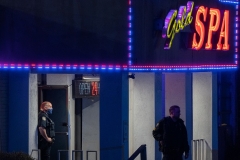 Police officers outside one of the three Atlanta-area massage parlors where Tuesday’s shootings occurred. (Photo by Elijah Nouvelage/AFP via Getty Images)

(CNSNews.com) – Despite a rush to judgment by some, the man in custody in connection with a deadly shooting at three massage parlors in the Atlanta area told investigators he was motivated not by anti-Asian sentiment but sex addiction, police in Georgia reported on Wednesday.

Cherokee County Sheriff’s Office spokesman Captain Jay Baker told a press briefing that 21-year-old Robert Aaron Long said he viewed the businesses as “a temptation for him that he wanted to eliminate.”

The shootings at the three parlors cost the lives of eight people – six of them described by police as Asian women. The remaining two fatalities were a white woman and a white man, while a Hispanic man was injured in one of the three incidents.

“The suspect did take responsibility for the shootings. He said that early on, once we began the interviews with him,” Baker said.

“He does claim that it was not racially-motivated. He apparently has an issue, what he considers a sex addiction, and sees these locations as something that allows him to – to go, to go to these places and – a temptation for him that he wanted to eliminate.”

Baker said he was not aware that the suspect had offered any religious or political views when interviewed.

Police said that Long, who was arrested in his car about 150 miles south of Atlanta, had indicated that he had been on his way to Florida, where he had planned to take similar actions. 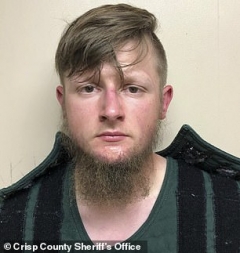 Atlanta Police Chief Rodney Bryant and other officers at the briefing cautioned that the investigation was still in its early stages.

Cherokee County Sheriff Frank Reynolds said Long had indicated during interviews that “he has some issues, potentially sexual addiction, and may have frequented some of those places in the past.”

“As the chief indicated, it’s still early, but the indicators right now are – it may not be [racially-motivated]. It may be targets of opportunity. Again, we believe that he frequented these places in the past, and may have been lashing out.”

Atlanta Mayor Keisha Lance Bottoms, also at the briefing, pushed back when asked about the nature of the targeted businesses, given the suspect’s claims about sexual addiction.

“We are not about to get into victim-blaming, victim-shaming here,” she said, adding that “as far as we know in Atlanta, these were legally-operating businesses that had not been on our radar, not on the radar of [the Atlanta Police Department].”

Four of the women killed on Tuesday were of Korean descent, according to the South Korean foreign ministry.

An escalation of anti-Asian sentiment has been reported in the U.S. since the coronavirus pandemic began.

Quick to add his opinion was the editor-in-chief of Global Times, a Chinese Communist Party mouthpiece in Beijing.

“Atlanta shootings: anti-China hysteria of the US has set off a backlash within the US, which will in turn exacerbate challenges to the US domestic governance,” tweeted Hu Xijin.