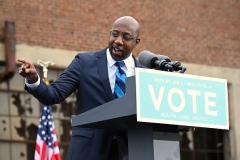 (CNSNews.com) – Raphael Warnock, one of the two Democrats competing in Georgia’s crucial Senate runoff next month, told a panel of rappers on Sunday that America was “fighting two viruses,” COVID-19 and systemic racism – “what I call COVID-1619.”

“We’re fighting two viruses,” he said. “Everybody’s focused on COVID-19 for a good reason. Over 300,000 Americans have died, and we’re seeing that black folk are disproportionately impacted. We’re more likely to die, more likely to be hospitalized.”

“Much of that is related to old systems of inequality – what I call COVID-1619 – which shows up in health inequality, wealth inequality, and the way in which we’re over-represented in the criminal justice system. And I think there are systemic ways of responding to that.”

Warnock was referring to the year the first enslaved Africans arrived in Virginia. On last year’s 400th anniversary the New York Times launched its controversial “1619 Project,” aiming “to reframe the country’s history by placing the consequences of slavery and the contributions of black Americans at the very center of our national narrative.”

Warnock is up against Republican Sen. Kelly Loeffler in the January 5 runoff, while Democrat Jon Ossoff is running against GOP Sen. David Purdue. The outcome will determine control of the U.S. Senate, since in a 50-50 tie then-Vice President Kamala Harris would be able to cast any tie-breaking vote.

Ossoff told the rappers that electing him and Warnock would not guarantee that the Senate would pass legislation of importance to their constituency, but that if the Republicans retain control of the Senate, “what I can guarantee is that no bills of substance” will pass.

He listed some of the things prioritized during the conversation with the rappers, including prison and drug reform legislation.

“Let’s talk about what specific, material, tangible things can be achieved when we win, and what is not achievable if we do not win,” he said.

“Folks know that the Senate majority hangs in the balance, right, that control of the United States Senate is at stake. But what does that mean for people? That’s just an abstraction – which political party is in control, why does that matter?

(“’Specially when you’ve been duped by both a time or two,” interjected Clifford Joseph Harris, the rapper who goes by the stage name T.I.)

“Fair enough,” Ossoff allowed. “Fair enough. So let’s get real specific. We can pass a new Civil Rights Act and a new Voting Rights Act. The next two years can be the most productive for civil rights and voting rights in Congress since 1964 and 1965. We can raise the minimum wage to $15. We can pass prison reform. We can reform federal drug law, deschedule cannabis, end federal prison sentencing for non-violent drug offenders.”

Later in the program, radio talk show host and rapper Darian “Big Tigger” Morgan pressed Ossoff on what tangible benefits would accrue for voting for the Democratic candidates, in the first six months of a new Senate.

“What are some things that we can look for between now and June that you – Aha, I see what my vote did, I see why my voting for Ossoff and voting for Warnock is beneficial to me?” he asked.