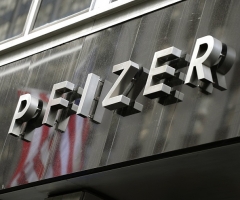 (Photo by Timothy A. Clary/AFP via Getty Images)

(CNSNews.com) – The Food and Drug Administration on Wednesday granted emergency use authorization (EUA) in the U.S. for the first antiviral pill against COVID-19 – a product whose makers say can reduce the chance of hospitalization or death by almost 90 percent in patients most likely to get severe disease.

Among the advantages, the oral medication can be taken at home and is easier to administer than monoclonal antibody drugs used up to now in the pandemic, which are delivered via injection or IV infusion, typically at a medical facility.

At $530 per course (according to a U.S. government contract to buy 10 million treatment courses), Paxlovid is also considerably cheaper than monoclonal antibody drugs.

Also, Pfizer reports that nirmatrelvir, one of the two drugs making up the Paxlovid treatment, appears to “maintain robust antiviral activity against” the omicron strain of the coronavirus, although ongoing research is underway.

By contrast, recent lab test data suggest that some of the monoclonal antibody drugs currently being used in the U.S. are not effective against omicron, which the CDC says has now become the dominant strain of the virus in the U.S.

Weighed against the pros offered by Paxlovid, the treatment course should be initiated within five days of the onset of symptoms, according to the FDA. Within those five days, a person experiencing symptoms will need to have a test, get the result, consult a doctor for a prescription, get the prescription filled, and begin the course.

Supplies of Paxlovid will be limited to begin with, although Pfizer last month announced an agreement with the federal government to supply 10 million courses, “with delivery fulfillment expected to be completed in 2022.”

Pfizer bases its assertions about effectiveness on clinical trials involving more than 2,000 unvaccinated adults with confirmed COVID-19 infection and at risk of severe illness. Roughly half received its treatment and the other half a placebo.

“Paxlovid significantly reduced the proportion of people with COVID-19 related hospitalization or death from any cause by 88% compared to placebo among patients treated within five days of symptom onset and who did not receive COVID-19 therapeutic monoclonal antibody treatment,” the FDA said in explaining its EUA decision.

By the 28th day of monitoring, no deaths had been reported in the treatment group, compared to nine deaths among those given the placebo, it said.

“We received good news today in our fight against COVID-19,” said President Biden, calling the pills “a promising new treatment option that will significantly reduce hospitalization and death as we battle the more transmissible Omicron variant.”

Last week, the FDA’s European Union equivalent, the European Medicines Agency issued advice to E.U. member-states that Paxlovid may be used to treat COVID-19-positive adults who do not require supplemental oxygen and who are at increased risk of becoming seriously ill.

Pfizer says it has submitted applications for authorization or approval to multiple regulatory bodies around the world and expects more such decisions to follow.

The FDA said it continues to urge the public to get vaccinated and receive a booster if eligible.

“Paxlovid is not a substitute for vaccination in individuals for whom COVID-19 vaccination and a booster dose are recommended.”