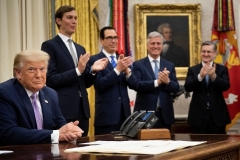 The home page of the Trump Accountability Project is topped with a photo showing senior administration figures applauding President Trump as he announced the historic agreement by the UAE to normalize relations with Israel. (Photo by Brendan Smialowski/AFP via Getty Images)

(CNSNews.com) – In sharp contrast to Joe Biden’s calls for American to “come together as a nation and heal,” some Democratic Party activists are promoting the compilation of a blacklist of people who worked for, funded, campaigned for, were appointed by, or endorsed President Trump.

The beginnings of a collaborative spreadsheet being produced for the so-called “Trump Accountability Project” shows the targets to include: campaign staff, administration members, judicial appointees, donors, legal counsel, and endorsers.

Some of their tweets have since been deleted, and the Trump Accountability Project website has been toned down somewhat, although archived content can still be found.

On Friday, Sevugan noted in a tweet that -- according to a CNN reporter -- White House staff were starting to look for new jobs. “Employers considering them should know there are consequences for hiring anyone who helped Trump attack American values,” he said. “Find out how at the Trump Accountability Project.”

Abrams tweeted, “We’re launching the Trump Accountability Project to make to make sure anyone who took a paycheck to help Trump undermine America is held responsible for what they did. Join us and help spread the word.”

Rep. Alexandria Ocasio-Cortez (D-N.Y.) then asked on Twitter, “Is anyone archiving these Trump sycophants for when they try to downplay or deny their complicity in the future? I foresee decent probability of many deleted Tweets, writings, photos in the future.” Her tweet has since been retweeted more than 32,000 times, and received more than 347,000 “likes.”

“Yes we are,” tweeted Simon in response to her tweet. “The Trump Accountability Project. Every administration staffer, campaign staffer, bundler, lawyer who represented them – everyone.”

Sevugan also responded to Ocasio-Cortez’ tweet:  “You better believe it. We just launched the Trump Accountability Project to make sure anyone who took a paycheck to help Trump undermine America is held responsible for what they did.”

After a Politico reporter tweeted, “History is going to be absolutely brutal on some of these people,” Sevugan responded, “So is the present. We’re launching the Trump Accountability Project …”

Beyond Democratic operatives, MSNBC analyst Anand Giridharadas tweeted, “No book deals, no fellowships, no sinecures, no board seats for any of the henchmen and collaborators. No pundit gigs, no lecture circuit, no congressional runs, no professorships.”

Among the many who criticized the initiative on Twitter was Sen. Marsha Blackburn (R-Tenn.), who called it “the epitome of the cancel culture. Our nation has long benefited from robust political debate, and this effort to silence those who support our President is vile.”

‘The world should never forget’

The Trump Accountability Project is inviting software engineers or others able to “help us archive a large number of Trump campaign/administration staffer tweets” to get in touch.

It’s website states, “We should welcome in our fellow Americans with whom we differ politically. But those who took a paycheck from the Trump Administration should not profit from their efforts to tear our democracy apart. The world should never forget those who, when faced with a decision, chose to put their money, their time, and their reputations behind separating children from their families, encouraging racism and anti-Semitism, and negligently causing the unnecessary loss of life and economic devastation from our country's failed response to the COVID-19 pandemic.”

Then follows three categories of people to be targeted:

--Those who elected him (Individuals who worked for the Trump for President campaign, Republican National Committee, and affiliated PACs in 2016 or 2020.)

--Those who staffed his government. (Individuals who worked in any role as a political appointee in the Trump administration.)

--Those who funded him. (Individuals who used their massive personal wealth and influence to bundle money for Trump.)

An earlier version of the site – since amended – was more expansive, adding three more categories:

--Those who served him. (Individuals who were appointed by President Trump to federal boards, commissions, or the judiciary.)

--Those who supported him. (Individuals and organizations that publicly endorsed either of Donald Trump’s campaigns for President, in 2016 or 2020.)

--Those who represented him. (Law firms that worked for the Trump for President campaign, or Trump administration officials.)

The earlier version also cast a wider net for funders, targeting anyone who donated “$1000 or more” to Trump’s campaigns.

Also noticeably absent on the amended site is a link to the lists themselves, although archived data reveals that they include:

A final category on the spreadsheet is presumably for people associated with the administration who then denounced it. It bears a single name, former DHS chief of staff Miles Taylor, who recently revealed himself to be the Trump critic “Anonymous.”

Meanwhile another initiative also calling itself the Trump Accountability Project comprises Duke University School of Law students “reporting instances where the Trump Administration may have violated the law.” It stressed on its Twitter feed that it was “NOT the group making lists.”