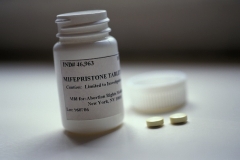 (CNSNews.com) – Pro-lifers reacted with dismay Monday to a federal judge’s ruling paving the way for a patient to be sent chemical abortion drugs in the mail for as long as the public health emergency declared over the coronavirus pandemic continues.

“We are extremely disappointed to see the courts once again side with the big abortion industry against women,” said Susan B. Anthony List president Marjorie Dannenfelser

“Abortion activists exploiting the COVID-19 pandemic to push their long-sought goal of expanding dangerous chemical abortion drugs have proven over and over that they will prioritize profits at the expense of health and safety.”

A preliminary injunction granted by District Judge Theodore Chuang in Maryland waives the Food and Drug Administration (FDA) risk-mitigation requirement for an in-person visit to a “hospital, clinic, or medical office” to obtain the mifepristone and misoprostol pills.

Chuang found that the requirement combined with the COVID-19 pandemic presented a “substantial obstacle” to a woman wanting to end a pregnancy.

“By causing certain patients to decide between forgoing or substantially delaying abortion care, or risking exposure to COVID-19 for themselves, their children, and family members, the in-person requirements present a serious burden to many abortion patients,” he wrote.

“Particularly in light of the limited timeframe during which a medication abortion or any abortion must occur, such infringement on the right to an abortion would constitute irreparable harm.”

The ruling means that after a “telemedicine” consultation – including discussion of a patient agreement form to be signed and returned by mail or electronically – health providers will be able to mail or deliver the pills to the patient.

Chuang, an Obama appointee, declined to set geographic limits on the ruling, noting the unpredictable and fast-changing nature of the pandemic across the nation.

He said the injunction waiving the FDA in-person requirement would be in effect until 30 days after the end of the public health emergency. It was first declared by Health and Human Services Secretary Alex Azar in January, and extended in April.

(The 30-day allowance is given to enable the plaintiffs to file a motion to extend the injunction if they believe there is grounds to justify that, and for the court to resolve the issue.)

The FDA in 2000 first gave conditional approval for mifepristone, under the trade name Mifeprex. The drug is taken orally, followed 24-48 hours later by misoprostol, taken orally or vaginally.

Together, the regimen destroys a developing baby in the womb – referred to in the lawsuit before Chuang’s bench as “the contents of the uterus.”

The suit noted that the mifepristone-misoprostol combination has been used to end more than four million pregnancies in the U.S. to date.

Initial FDA approval was for use up to seven weeks into a pregnancy, although that was extended in 2016 to up to ten weeks. (The suit noted that the pills are now increasingly being prescribed for up to 11 weeks, “in accordance with research confirming the safety and efficacy of medication abortion beyond 10 weeks of pregnancy.”)

The suit was brought by the American College of Obstetricians and Gynecologists (ACOG), “SisterSong Women of Color Reproductive Justice Collective,” and several other plaintiffs, represented by ACLU lawyers.

They argued that maintaining the FDA requirement for in-person consultation during the pandemic violated patients’ rights under the due process clause of the Fifth Amendment, and imposed “an undue burden on patients’ right to abortion.”

ACOG president Eva Chalas called the ruling a victory both for patients and “for the dedicated clinicians who are working to provide needed care without unnecessary exposure of patients, their families and the members of the healthcare team, to the novel coronavirus.”

But LiveAction president Lila Rose called it “a sad day for women and children across the country.”

“The abortion industry is using a deadly global pandemic to increase their abortion sales and raise the abortion death toll,” she said.

“The drug has killed more than 3.7 million innocent children,” Rose said. “The abortion pill regimen works by starving the developing embryo of nutrients and forcibly expelling him or her from the mother’s body.”

She also noted that 24 deaths and 4,200 adverse effects for the mother have been reported after taking the abortion pill combination since its FDA approval.

Apart from cramping and vaginal bleeding – the expected effect of the drugs – common side effects include “nausea, weakness, fever/chills, vomiting, headache, diarrhea and dizziness,” according to Mifeprex’ manufacturer, Danco Laboratories.

“Your provider will tell you how to manage any pain or other side effects,” says, then warns, “These are not all the possible side effects of Mifeprex.”

The FDA “in-person consultation” requirements have long irked some.

“For years, the medical community has opposed these restrictions, which have no medical basis, provide no patient benefit, and unnecessarily restrict access to care,” ACOG said when announcing the suit.

“In the current COVID-19 pandemic, these burdensome requirements are especially harmful and must be lifted.”

In April, Sens. Elizabeth Warren (D-Mass.), Tammy Baldwin (D-Wisc.) and Patty Murray (D-Wash.) in a letter to FDA Commissioner Stephen Hahn called for “flexibility” under the circumstances of the pandemic, “rather than letting any ideological objection to abortion care prevent health care providers from offering the safest care options to their patients.”