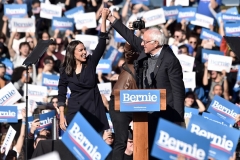 (CNSNews.com) – Joe Biden and former rival Sen. Bernie Sanders on Wednesday named a climate task force led by former Secretary of State John Kerry and Rep. Alexandria Ocasio-Cortez (D-N.Y.), amid signs that it’s going to be an uphill battle to get some of Sanders’ young, climate-focused supporters to associate themselves with Biden’s presidential campaign.

One of the task force’s eight members, Sunrise Movement co-founder Varshini Prakash, posted a statement online Wednesday justifying her decision to join the task force, but making it clear the decision did not amount to an endorsement of Biden, about whose record she had little positive to say.

“Getting to this point was not an easy decision,” she wrote. “It’s no secret that Vice President Biden was not the favorite candidate of our movement, or young people more generally.”

Prakash listed several issues on which Biden, in her view, had been “on the wrong side of history,” including the Iraq War, mass incarceration, and NAFTA.

Then she broached Tara Reade’s sexual assault accusations against Biden, and what she called a “well-documented history of him pushing the boundaries of consent with women’s space and bodies.”

“We deserve a fair, independent process that centers survivors and their healing,” Prakash wrote. “We’re in touch with and following the lead of survivor justice organizations in their approach to addressing and responding to Tara Reade’s allegations and navigating how to best ensure justice and accountability.”

That said, Prakash continued, “the stakes of this election are crystal clear to me.”

“When we say we have 10 years to completely transform our society and economy to stop climate change, we mean it. We cannot afford another four years of Donald Trump pushing us backward, and I believe in our movement’s ability to begin winning a Green New Deal under a President Biden.”

“As if the fate of our planet wasn’t enough, our democracy is also at stake. This election is about saying no to fascism and authoritarian rule.”

The climate team is one of six “unity” taskforces announced by Biden and Sanders after the latter suspended his campaign, in an effort to ensure Biden embraces issues of importance to progressives. They are expected to make recommendations to Biden and the DNC platform committee.

Sanders’ withdrawal left the Sunrise Movement rattled and – judging from social media posts – split over what to do next, with some activists vowing never to vote for Biden.

The former vice president did not endear himself to the movement when he reacted to one of its activists asking him on the campaign trail last fall about accepting money from super PACs by saying, “Look at my record, child.”

When Biden the previous month attended a fundraiser co-hosted by the founder of a company in the liquefied natural gas sector, Sunrise Movement activists demonstrated outside the New York venue, chanting, “Hey hey, hey Joe, fracked gas has got to go” and – according to a pool report – “Biden, Biden, you can’t hide, we can see your greedy side.”

By March, Sunrise Movement activists who turned up at a Biden rally in Detroit were chanting “Hey, hey! Ho, ho! Joe Biden has got to go!”

‘Our planet is dangerously imperiled ‘

John Kerry has been campaigning alongside Biden since endorsing him last December, while his taskforce co-chair Ocasio-Cortez was a high-profile surrogate for Sanders.

The two, 46 years apart in age, are both outspoken advocates on climate change. Kerry was an architect of the Paris climate accord, and Ocasio-Cortez is championing the Green New Deal in Congress.

She tweeted Wednesday that she had accepted Sanders’ nomination to co-chair the taskforce with Kerry after conferring with “grassroots activists and climate allies.”

“Our planet is dangerously imperiled, and wherever there are decisions made, the people must have a voice.”

Underlining her activist credentials, Ocasio-Cortez said, “I have always believed that real change happens not with a panel or task force, but in everyday people organizing mass movements to demand change. Yet we should also commit to showing up everywhere – every space where there are decisions & formative conversations – w/ mvmt voices.”

Kerry tweeted that he was “excited” to be working with Ocasio-Cortez and the others:

“Rolling up our sleeves! @JoeBiden knows this is the biggest crisis facing our planet, and we can turn climate energy into climate action.”