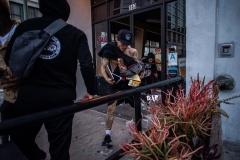 Looters run from a ransacked store in downtown Los Angeles on Saturday. (Photo by Apu Gomes/AFP via Getty Images)

(CNSNews.com) – The Council on American-Islamic Relations (CAIR) is demanding that Twitter suspend President Trump’s “racist” account, over his recent tweeted warning that looters exploiting protests sparked by the death of George Floyd risk being shot.

CAIR based its charge that the warning amounted to a “racist threat of violence” on the fact that Trump used the word “thugs” to describe those looting, vandalizing and torching businesses.

“Thugs,” explained CAIR, is “a race-coded word that bigoted politicians use to negatively describe African-American protestors.”

A quick review of Trump tweets going back several years indicates widespread use of the four-letter word before and after he became president – but with a wide range of targets.

Among others, Trump used the descriptor in reference to ISIS terrorists, Democratic lawmakers, MS-13 gang members, the surviving Boston marathon bomber, and protestors outside his campaign rallies.

The tweet in question, posted by the president early on Friday morning amid scenes of arson and looting in Minneapolis, Minn., read: “… These THUGS are dishonoring the memory of George Floyd, and I won’t let that happen. Just spoke to Governor Tim Walz and told him that the Military is with him all the way. Any difficulty and we will assume control but, when the looting starts, the shooting starts. Thank you!”

Twitter limited the visibility of Trump’s tweet, arguing that it violated the platform’s policies on “glorifying violence,” but stopped short of removing it altogether, citing a “public interest” exception to its rules.

For CAIR, which calls itself the nation’s biggest Muslim civil rights and advocacy group, that wasn’t an adequate response, and it says Twitter should suspend both Trump’s personal account and the White House one which retweeted the post.

“The Minnesota National Guard should publicly affirm that it will not obey such unlawful orders, and Twitter should suspend the accounts of both the White House and President Trump for posting this racist threat of violence,” he said.

Five years ago, President Obama used the same word in connection with those looting and destroying businesses in Baltimore, amid protests over the death of Freddie Gray, a 25-year-old black man who died of a spinal-cord injury while in police custody.

“A handful of criminals and thugs who tore up the place,” were the words Obama used to describe the perpetrators of the violent behavior.

Speaking at the White House on April 28, 2015, a day after the rioting erupted, he said there was “no excuse for the kind of violence that we saw yesterday.”

“When individuals get crowbars and start prying open doors to loot, they’re not protesting, they’re not making a statement – they’re stealing,” Obama said. “When they burn down a building, they’re committing arson. And they’re destroying and undermining businesses and opportunities in their own communities that rob jobs and opportunity from people in that area.”

“That is not a protest. That is not a statement,” he said. “It’s people – a handful of people taking advantage of a situation for their own purposes, and they need to be treated as criminals.”

Obama then noted reports that community leaders, clergy and others were “now going back into these communities to try to clean up in the aftermath of a handful of criminals and thugs who tore up the place.”

Baltimore’s then-mayor, Stephanie Rawlings-Blake, who is black, also used the term “thugs” to describe those resorting to violent behavior, saying during a press conference there was a clear difference between those peacefully protesting Gray’s death “and the thugs, who only want to incite violence and destroy our city.”

After Baltimore City Councilman Carl Stokes during a CNN interview criticized the use of the word “thugs,” calling it a racist term, the Democratic mayor apologized in a tweet.

“When you speak out of frustration and anger, one can say things in a way that you don’t mean,” said Rawlings-Blake. “That night we saw misguided young people who need to be held accountable, but who also need support. And my comments then didn’t convey that.”

Criticism was directed at Obama too, although when asked about it the following day White House press secretary Josh Earnest said he doubted the president would “in any way revise the remarks that he shared with all of you.”

“Whether it’s arson or the looting of a liquor store, those were thuggish acts,” said Earnest. “And I think the president felt it was important, and continues to think it’s important, to draw a clear distinction between those actions and the efforts of the vast majority of people in that community to draw attention to the legitimate concerns that they have about the treatment of Freddie Gray …”

Trump, who just weeks later would formal announce his presidential run, scoffed at the criticism around the use of the word.

“They now say using the word ‘thug’ is, like so many other words, not politically correct (even though Obama uses it),” he tweeted. “It is racist. BULL!”