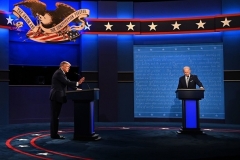 (CNSNews.com) – One of the messages Joe Biden seemed eager to get across during Tuesday night’s combative presidential debate in Cleveland, Ohio was that he is his own man, not beholden to the left wing of the Democratic Party.

“Your party wants to go socialist medicine and socialist health care,” said President Trump, in reference to the “Medicare for all” proposals promoted by progressives including Sen. Bernie Sanders, who Biden defeated in the Democratic primary contest – and, at least at an earlier stage of the primary campaign, by his now-vice presidential running mate, Sen. Kamala Harris (D-Calif.).

“My party is me,” retorted Biden. “Right now I am the Democratic Party.”

“And they’re going to dominate you Joe, you know that,” Trump continued.

“I am the Democratic Party right now,” Biden repeated.

(“Not according to Harris,” interjected Trump.)

“The platform of the Democratic Party is what I in fact approved of, what I approved of,” Biden said.

“Joe, you agreed with Bernie Sanders, who’s far left, on the manifesto, we call it, and that gives you socialized medicine. Are you saying you didn’t agree?”

“The fact of the matter is, I beat Bernie Sanders,” said Biden.

“Not by much,” shot back Trump, repeating his claim that if Sen. Elizabeth Warren (D-Mass.) had withdrawn from the race earlier, Sanders would have beaten Biden in “every primary on Super Tuesday.”

The “manifesto” referred to by the president is a 110-page document compiled by six “unity taskforces” set up by the Biden and Sanders camps after the democratic socialist senator from Vermont suspended his presidential campaign. After it was released, Sanders said that although were clearly differences between the perspectives of the “progressive movement” and “Biden’s people,” the deal reached by the taskforces, “if implemented, will make Biden the most progressive president since FDR.”

The policy document does not endorse Sanders’ “Medicare for all” proposal, but focuses instead on expanding Obamacare, allowing Americans to keep private health insurance but also having a so-called public option that would be administered by the Medicare program.

One of the Biden-Sanders task forces dealt with climate, and was co-chaired by former secretary of state and Biden surrogate John Kerry, and Sanders campaign surrogate and Green New Deal advocate Rep. Alexandria Ocasio-Cortez (D-N.Y.). Its policy recommendations did not directly endorse the Green New Deal, but did set goals that including eliminating carbon emissions from power plants by 2035, and retrofitting millions of buildings to make them “greener.”

Biden said his own climate proposals would “create millions of good paying jobs,” but moments later said that “the Green New Deal will pay for itself as we move forward.”

“I support the Biden plan that I put forward,” Biden said. “The Biden plan, which is different than what he calls the radical Green New Deal."