Biden Disputes That Virginia Race Is Referendum on His Policies 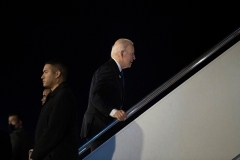 President Biden boards Air Force One in Edinburgh on Tuesday night to fly back to Washington. (Photo by Brendan Smialowski / AFP via Getty Images)

(CNSNews.com) – President Biden voiced confidence Tuesday that Democrat Terry McAuliffe would win Virginia’s gubernatorial election, a prediction that turned out to be wrong. He also disputed the notion that the off-year election constitutes a referendum on his policies.

“I don’t believe, and I’ve not seen any evidence that whether or not I am doing well or poorly, whether or not I’ve got my agenda passed or not, is going to have any real impact on winning or losing,” he told reporters in Glasgow before leaving Scotland to fly back to Washington.

“Even if we had passed my agenda,” he said, “I wouldn’t claim we won because Biden’s agenda passed.”

Biden predicted that the race would be “very close” and come down to turnout.

Speaking around three-and-a-half hours before polls officially closed in Virginia, Biden was responding to a question from a reporter who pointed out that McAuliffe was struggling in a state that Biden won by ten percentage points in 2020.

“Do you see his problems as a rebuke of your presidency and could this signal real losses for Democrats in the midterms?” she asked.

He acknowledged that the race was “tight” and also contended that off-year election results are typically unpredictable.

“That’s been the case up and down you know for a long time, especially as Virginia has turned more and more blue.”

McAuliffe led most opinion polls until mid-October, when Youngkin began to edge ahead by 1-2 points.

CBS News exit polling on Tuesday evening found that the most important issue for respondent voters in Virginia was the economy (33 percent), followed by education (24 percent), taxes (16 percent), the coronavirus (13 percent), and abortion (9 percent).

In the New Jersey race, Democratic incumbent Gov. Phil Murphy has enjoyed a steady lead in polling against Republican challenger Jack Ciattarelli, a former member of the New Jersey General Assembly, throughout the campaign.